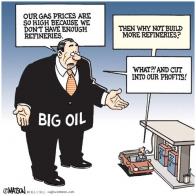 Business Week has picked up on a growing conundrum for the oil industry. Even as oil prices soar, earnings at Exxon, BP, and ConocoPhillips are coming back down to earth. Are lower profits here to stay?

What’s ailing Big Oil, asks Business Week? This round of lower profits was caused by low refining margins, or the difference between the price of crude oil and that of refined products like gasoline. Because gasoline prices haven’t been rising in tandem with soaring crude, integrated oil companies and refiners are suffering a major blow in refining and marketing profits. Some analysts say refining problems are here to stay.

“Gasoline prices can’t keep pace with the sharp runup in crude oil prices,” says Fadel Gheit, senior energy analyst for Oppenheimer & Co. (OPY). “Going forward, whatever an oil company can get for crude oil [production], it will forfeit at the pump.”

Still, others say it’s important to keep the industry’s woes in perspective. “Only in this crazy bull market do people think that Exxon making $9.4 billion is some sort of problem,” says Peter Beutel, president of the energy risk management firm Cameron Hanover in New Canaan, Conn. “I’m personally not shedding any tears for Exxon; it’ll keep making plenty of money.”

Tell you a secret, Peter. You are not the only one.