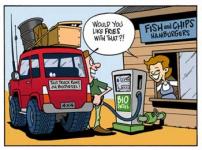 A United Nations expert has condemned the growing use of crops to produce biofuels as a replacement for petrol as a crime against humanity and called for a five-year ban on the practice.

The UN special rapporteur on the right to food, Jean Ziegler, said he feared biofuels would bring more hunger and were “a recipe for disaster”. It was, he said, a crime against humanity to divert arable land to the production of crops which are then burned for fuel.

Ziegler asked for a five year ban so technological advances would enable the use of agricultural waste, such as corn cobs and banana leaves, rather than crops themselves to produce fuel.