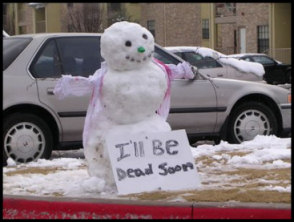 So, here we are in Washington, sweating away in what is being called Red October for its record temperatures. Fall is reportedly actually on the way soon, but its looking like a mild winter on the East Coast this year.

According to the Wall St. Journal, seasonal forecasts from the the National Weather Service call for above-normal temperatures in the Northeast, the world’s largest heating-oil market, from September to December and hint this could continue through March.

This reduction in use may add up to a drop in the price of oil which of course would in theory lead to an increase in demand, which would emit more carbon thus warming the planet more.