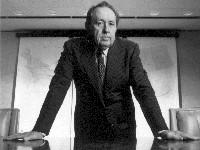 Texas oil billionaire Oscar Wyatt faces up to two years in prison after pleading guilty to paying an illegal kickback to the regime of late Iraqi leader Saddam Hussein in exchange for the right to purchase oil.

The surprise plea, coming in the third week of a trial related to the United Nations oil-for-food program, ends a case that threatened to send the oil man to prison for the rest of his life.  ”I didn’t want to waste any more time at 83-years-old fooling with this,” Wyatt said after the hearing in Manhattan federal court.

Wyatt was accused of paying millions of dollars to Iraq outside of the 1996 U.N. program, created to allow Iraq to use oil revenue to buy food and medicine, easing the impact of sanctions imposed after its 1990 invasion of Kuwait. The Iraqis were permitted to select the companies that would receive oil.    Wyatt, indicted on five counts, pleaded guilty to one, conspiracy to commit wire fraud. He also agreed to forfeit $11 million.