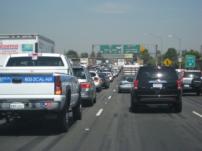 A US federal judge has dismissed a case brought by California against six leading carmakers over damage caused by the emissions of CO2 from cars. The legal action, the first of its kind, demanded millions of dollars in compensation from General Motors, Ford, Honda, Toyota, Chrysler and Nissan.

But the judge ruled that the issue of whether carmarkers were accountable was a political, not legal, matter. The lawsuit, filed by California’s former Attorney-General Bill Lockyer in September 2006, wanted to make the manufacturers liable for the damage he said was caused by greenhouse gas emissions from the state’s estimated 32 million registered vehicles.

It said that the producers has created a “public nuisance” by making “millions of vehicles that collectively emit massive quantities of carbon dioxide”. But in his written ruling, District Judge Martin Jenkins wrote that it would be necessary for a decision to be made as to what volume of greenhouse gas emissions would be deemed “unreasonable” before a court could make a ruling.

California’s supervising deputy attorney general Ken Alex told AFP that state officials were considering their options. “Obviously, we’re very disappointed with the ruling, and we’re going to read it very carefully,” he said. “We certainly have the ability to file an appeal… and that will be part of our calculations.”