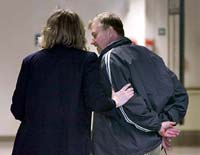 Bill Allen, the former chairman of VECO Corp, has testified that he paid a lawmaker nearly $8,000 to help keep him in office and advocate for the construction of a natural gas pipeline tapping the state’s vast North Slope Reserves.

The money was paid to former House Speaker Pete Kott in an inflated invoice for a flooring job to Kott’s business. Kott wanted the extra money so he could hire his son to run his re-election campaign, Allen said. “He was going to run again and he needed his son to help him,” Allen said.

Kott is charged with conspiracy to solicit financial benefits for his service as a legislator, extortion “under color of official right,” bribery and wire fraud, which involved improperly discussing legislative business by phone. Prosecutors say he was also promised a job as a lobbyist for VECO. If convicted of all charges, Kott could face up to 55 years in prison and a $1 million fine.

Kott’s attorney denies the charges. Allen and former VECO vice president Rick Smith pleaded guilty in May to extortion, conspiracy and bribery of legislators. Allen has not been scheduled for sentencing.