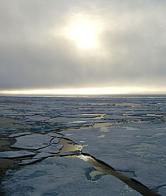 The Arctic ice cap has collapsed at an unprecedented rate this summer and levels of sea ice in the region now stand at a record low, scientists have warned. Experts said they were “stunned” by the loss of ice, with an area almost twice as big as Britain disappearing in the last week alone.

So much ice has melted this summer that the north-west passage across the top of Canada is fully navigable, and observers say the north-east passage along Russia’s Arctic coast could open later this month. If the increased rate of melting continues, the summertime Arctic could be totally free of ice by 2030.

Mark Serreze, an Arctic specialist at the US National Snow and Ice Data Centre at Colorado University in Denver which released the figures, said: “It’s amazing. It’s simply fallen off a cliff and we’re still losing ice.” The Arctic has now lost about a third of its ice since satellite measurements began 30 years ago, and the rate of loss has accelerated sharply since 2002.

Dr Serreze said: “If you asked me a couple of years ago when the Arctic could lose all of its ice, then I would have said 2100, or 2070 maybe. But now I think that 2030 is a reasonable estimate. It seems that the Arctic is going to be a very different place within our lifetimes, and certainly within our children’s lifetimes.”