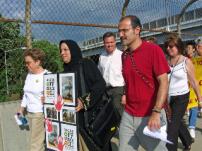 Abdul-Hadi al-Hasani, deputy head of Iraq’s parliamentary energy committee, said the new rules would pass before the end of the year — but only after significant amendments to the draft Baghdad approved in July after months of wrangling.

Hasani said parliament will want to include controversial annexes that list the oilfields to be controlled by a new national oil company and detail the contract models to be used to develop the dilapidated sector, which accounts for over 90 percent of government income.

“In the next few weeks it will be put forward for a first reading, then we have to come back and discuss it before voting,” Hasani said. “It is going to be hotly debated. I believe there will be a lot of amendments put forward.”

I think the term “hotly debated” is an understatement. Its going to be one hell of a scrap before the law is passed.