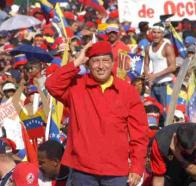 Hugo Chavez has infuriated his critics by laying out the road map for moving his oil-rich nation to a socialist state, proposing a radical constitutional reform which could have at its centre indefinite re-election for himself.

Addressing the National Assembly, Chavez laid out 33 changes he plans to make to the constitution he introduced in 1999. “We have broken the chains of the old, exploitative capitalist system,” he said. “The state now has the obligation to build the model of a socialist economy.”

Mr Chavez, 54, plans to overturn the decree of his 1999 constitution which laid out a maximum of two six-year terms for any president. The new constitution calls for seven-year terms with indefinite re-election – which critics argue means that Chavez could become President for life.

In a television interview prior to his address, the president said he believed the “immense majority” of the people would back his plan, but he predicted a “great battle” with the opposition. “The Venezuelan opposition, without exception, is … aligned with the interests of the empire,” he said, referring to the United States.

I bet those American oilmen were feeling rather queasy watching it.