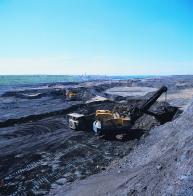 The rush to invest in Canada’s oil sands is on (see yesterday’s post on Shell). Marathon Oil, the largest oil refiner in the U.S. Midwest, is set to become the latest international energy player to grab a stake in Alberta’s oil sands, after it announced a deal yesterday to buy Calgary-based Western Oil Sands Inc. for $5.84-billion.

The acquisition not only resolves the long-running quest by Western to find a buyer, but also provides Houston-based Marathon with the oil sands stake that it has been seeking.

Analysts said investors should not be surprised if a competing bid were to materialize and raised the possibility Marathon could be forced to sweeten its offer.

Marathon, the fourth-largest U.S.-based integrated oil and gas company and the fifth-largest U.S. refiner, sees the oil sands as a natural future source of crude for its refineries. The Midwest, where it is active, is the largest market for Canadian crude exports.

“Marathon’s strategically advantaged U.S. Midwest downstream business is well-positioned to provide both near- and long-term solutions to maximize the value of these substantial bitumen resources,” said Marathon CEO Clarence Cazalot.