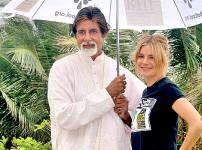 The Hollywood actress, and star of “Casanova,” “Layer Cake” and “Alfie” met Bachchan in Mumbai at the start of a weeklong trip to India as an ambassador for Global Cool.

“If each one of us does our bit, we will be helping to keep global warming from harming our countries,” Miller said.