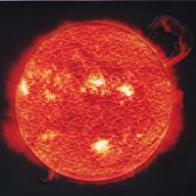 The sceptics must be choking on their corn-flakes this morning, as one of their main arguments to counter the mainstream consensus about climate change has yet again been shot down in flames.

In building their argument that human activity is not to blame for climate change, the sceptics have argued that the current warming is just part of a natural cycle – the result of variation in the sun’s output and not carbon dioxide emissions.

But a new analysis of data on the sun’s output in the last 25 years of the 20th century has firmly put the notion to rest.

The data shows that even though the sun’s activity has been decreasing since 1985, global temperatures have continued to rise at an accelerating rate.

“The temperature record is simply not consistent with any of the solar forcings that people are talking about,” said lead author Mike Lockwood at the Rutherford Appleton Laboratory in Oxfordshire. “They changed direction in 1985, the climate did not … [the temperature] increase should be slowing down but in fact it is speeding up.”

Prof Lockwood’s data, published today in the Proceedings of the Royal Society, shows the sun’s magnetic field has declined since 1985, even as the world heats up. Lockwood said the study was “another nail” in the coffin of the notion that solar activity is responsible for global warming.

A spokesman for the Royal Society, the UK’s leading scientific academy, said: “This is an important contribution to the scientific debate on climate change. At present there is a small minority which is seeking to deliberately confuse the public on the causes of climate change. They are often misrepresenting the science, when the reality is that the evidence is getting stronger every day. We have reached a point where a failure to take action to reduce carbon dioxide and other greenhouse gas emissions would be irresponsible and dangerous.”