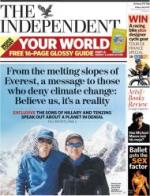 On the eve of the Live Earth concerts this weekend, Peter Hillary and Jamling Tenzing the sons of the first two men to climb Everest, have said the mountain is now so ravaged by climate change that they would no longer recognise it.

The Independent newspaper reports that the base camp where Sir Edmund and Norgay began their ascent is 40 metres lower than it was in 1953.

The glacier on which it stands, and those around it, are melting at such a rate that scientists believe the mountain, whose Nepalese name, Qomolangma, means Mother of the World, could be barren rock by 2050.

Up to 40,000 Sherpas who live at the base of the Himalayas face devastation if vast new lakes formed by the melted ice burst and send a torrent of millions of tons of water down the slopes.

Mr Hillary, who has himself twice reached Everest’s summit, said: “Climate change is happening. This is a fact. Base camp used to sit at 5,320 metres. This year it was at 5,280 metres because the ice is melting from the top and side. Base camp is sinking each year. For Sherpas living on Mount Everest this is something they can see every day but they can’t do anything about it on their own.”

The glacier where Sir Edmund and Norgay pitched their base camp before eventually reaching the summit at 29,000ft on 29 May 1953 has retreated three miles in the past 20 years. Scientists believe that all glaciers in the Himalayas, which are between half a mile and more than three miles in length, will be reduced to small patches of ice within 50 years if trends continue.

Mr Tenzing said: “The glaciers have receded a great deal since my father’s time. There are many things he wouldn’t recognise today. The glacier on which base camp sits has melted to such a degree that it is now at a lower altitude. I think the whole face of the mountains is changing.”

The glacial retreat presents a double peril for those who live in the Himalayas and the populations of India and China, where the water flowing from the mountains accounts for 40 per cent of the world’s fresh water.

In the longer term, scientists believe the depletion of the glaciers will drastically reduce the flow of water into the nine major rivers fed by the Himalayan glaciers.

Let’s hope Live Earth will actually make a real, lasting difference and is not a charade for the stars.