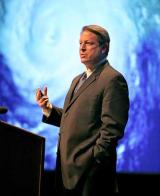 Another Vice-President (well ex-) is also in the news.

A new election poll in the US suggests Democratic voters would prefer Al Gore to any of the declared contenders, including frontrunner Hillary Clinton.

It highlights continuing dissatisfaction among supporters of both main parties with the choice of candidates to succeed George Bush.

But if Mr Gore were to seek the Democratic nomination, 29% of Ms Clinton’s backers would switch their support to him, the poll found. When defections from other candidates are factored in, Gore would take the lead with 32% support.

Mr Gore has repeatedly denied he is planning a White House run, but things cvould change. “I have not ruled out the possibility of getting into politics some time in the future but I don’t expect to because I don’t expect things to change,” Mr Gore says in an interview in the July edition of Fast Company magazine. “If they did change, then I would feel differently.”

Gore is likely to make headlines again with the Live Earth concerts on July 7. He has helped to organise the eight shows, to be held simultaneously around the world, to raise awareness and funds to combat climate change.

What do people think – should Gore be the next President?