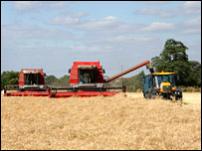 BP has joined forces with food giant, Associated British Foods, to build a £200m biofuels plant to meet the growing demand, but the move has triggered fears about its inteinsive farming and its effect on wildlife.

The plant in the North East of England will need hundreds of thousands of acres of land set aside for wheat production to make ethanol. Iain Conn, the chief executive of the BP’s refining and marketing arm, said the biodiesel market was quite separate from food, and “the impact on food prices is likely to be negligible”.

George Weston, chief executive of ABF, said the move would soak up some of the two to three million tonnes of surplus wheat produced in the UK and bring some agricultural land back into use. “It will get farmers back to growing crops instead of using set-aside and (EU) grants.”

The Saltend facility, on an existing oil refinery site, will make 420m litres of ethanol a year when it begins production in 2009.

Not everyone is convinced. Roger Higman, campaign coordinator for Friends of the Earth, said that whilst he supports so-called “green fuels”, you “have to be careful because you could destroy the British countryside and the habitat for wildlife with the intensive growing of wheat.”

But there is growing evidence that biofuels are not green at all.