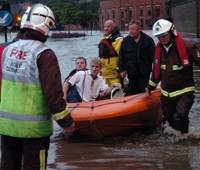 Large parts of Eastern and Northern Britain remain under water this morning as over a month’s rain fell in less than twenty four hours. Residents south the city of Sheffield have been evacuated after fears that a dam may burst, after cracks appeared in its side.

Some parts of the country received more rain in twenty four hours than has ever been recorded. And it’s meant to be the middle of Summer. “It’s been chucking it down. It just hasn’t moved,” said a spokesman for the Meteorological Office yesterday, as rainfall records fell around him.

“This is quite exceptional … by 6pm Capel Curig in Wales had received 70.4mm (2.8in), but Wales is always a bit wet. More surprisingly, Bridlington in Yorkshire has had 65mm (2.5in) and an unofficial rain gauge in Hull has already recorded 94mm (3.7in).

But is it climate change? There is no doubt that yesterday’s torrential storms do fit an emerging pattern of “extreme events” in rainfall in Europe which is consistent with predictions of climate change, and which has started to become increasingly clear.

With temperatures generally rising around the world, and subtropical temperatures becoming more common in Europe, extreme events are predicted, with intense localised storms becoming the norm. After a drought last year, the autumn and winter combined were the wettest on record in Britain, and the three months of spring were the hottest on record for the whole of the UK, since 1914.

The early summer was the warmest, sunniest and driest, with the average temperature for April 11.1C (52F), beating the previous record of 10.6C, set in 1865. South-east and eastern England had next to no rain, prompting fears of another drought.

Now some places in Yorkshire have been flooded three times in three weeks. It was lucky that this kind of rain didn’t fall on Glastonbury. It was muddy enough there already.