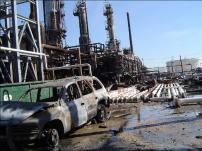 BP’s internal investigator has admitted in sworn testimony that his final draft report on the UK company’s management responsibility for the 2005 Texas refinery explosion was toned down.

Wilhelm Bonse-Geuking, BP’s European refining group vice-president, was charged with leading a team to determine management responsibility for the devastating explosion which killed 15.

Yet in his deposition Mr Bonse-Geuking said tat early drafts of his report found “negligence” and BP executives “ignored process safety”. Yet, he said, in the final draft, “inattention’’ replaced “negligent’’ and “failed to appreciate’’ replaced “ignored”.

“We found that our paper would be more convincing if we took some, let me call it, emotional elements out,” Mr Bonse-Geuking said. He said he signed off on the final version without observing all the changes or determining who made them.

The changes are important, argues the Financial Times, because they appear to limit BP’s legal liability ….