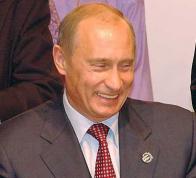 Well all the papers this morning are about the new cold war stand-off between American and Russia over its missile defence system, with Putin retaliating that he might position Russian nuclear weapons towards Europe.

Well nuclear missiles are not the only standoff Putin is involved in at the moment. He also cranked up the tension yesterday with BP when he warned the oil company and its partners in the $20bn (£10bn) Kovykta gas field that he was running out of patience over their refusal to meet production targets – with the implied threat that they would lose their licence to operate the fields.

Mr Putin said that if BP and its partners “are doing nothing to meet licence obligations, how much longer do we have to tolerate this?”

Last Friday, Russia’s resources ministry put off by two weeks a decision on whether to remove the licence from BP’s Russian venture, TNK-BP. However, the delay was considered no more than a tactical move so as not to elevate the issue to an international incident ahead of the G8 Summit.

But this has not prevented Mr Putin from continuing to turn the screw on BP. Once the dust from the G8 has settled, the most likely outcome, say analysts, is that BP’s partners will be forced out of the project completely or have their holdings severely diluted. BP would then be forced to work alongside Gazprom with its own 50 per cent stake reduced to 49 per cent.