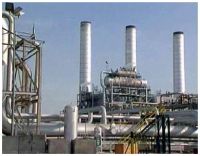 Captured al-Qaeda militants have “confessed” on Saudi media that last year’s foiled suicide attack on the world’s largest oil processing facility was part of a plot to strike oil installations in an attempt to draw U.S. troops into Saudi Arabia.

Abdullah al-Muqrin, one of the four, said the attack was meant to embarrass the kingdom, destabilize oil prices in the United States and ultimately draw in U.S. troops to the country. “It was all about luring in America to intervene, irrespective of the expected high loss of human life or the economic damage,” al-Muqrin said.

Al-Muqrin said that al-Qaeda had been also planning attacks on oil installations in Kuwait and the Untied Arab Emirates in response to bin Laden’s 2004 edict to followers to attack oil installations and stop the flow of oil to the United States.