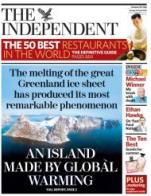 The Independent newspaper leads on its front-page that the map of Greenland will have to be redrawn.

A new island has appeared off its coast, suddenly separated from the mainland by the melting of Greenland’s enormous ice sheet, a development that is being seen as the most alarming sign of global warming.

Several miles long, the island was once thought to be the tip of a peninsula halfway up Greenland’s remote east coast but a glacier joining it to the mainland has melted away completely, leaving it surrounded by sea.

Shaped like a three-fingered hand, it has been discovered by a veteran American explorer and Greenland expert, Dennis Schmitt, who has named it Warming Island (Or Uunartoq Qeqertoq in Inuit).

According to the Independent: “As the satellite pictures and the main photo which we publish today make clear, Warming Island has been created by a quite undeniable, rapid and enormous physical transformation and is likely to be seen around the world as a potent symbol of the coming effects of climate change”.

“But it is only one more example of the disintegration of the Greenland Ice Sheet, that scientists have begun to realise, only very recently, is proceeding far more rapidly than anyone thought”.

“The second-largest ice sheet in the world (after Antarctica), if its entire 2.5 million cubic kilometres of ice were to melt, it would lead to a global sea level rise of 7.2 metres, or more than 23 feet”.