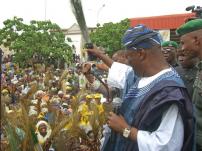 Nigeria’s presidential elections – that will impact the country’s oil industry – have been dismissed as so chaotic and flawed that they should be re-run.

Election observers said most polling stations only had half the ballot papers they needed. Half the country had no ballot papers at all. “You cannot use the result from half of the country to announce a new president,” said Innocent Chukwuma, chairman of the Transition Monitoring Group, a respected Nigerian observer mission.

Ballot papers failed to turn up or arrived late in more than half of the country’s 120,000 polling stations, outraging voters who claimed the hitches were part of a ruling party plan to stay in power.

Max van den Berg, head of a EU monitoring team, said: “For now the assessment is outspokenly negative… I’m very concerned.” The EU report on the vote is expected to be released today.