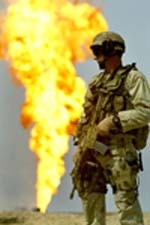 Among the many problems with the Democrats War Supplemental is the not so small fact that it endorses passage of the Iraqi Oil Law.

Not so fast, say Dem Leaders and allies. Their “clever plan” is that Bush’s benchmarks will not be met in the next eight months, after which, the bill will require withdrawal. Its the best they can get right now, they say.

Problem is, it’ll be game over and mission accomplished for Big Oil in Iraq in that time. The oil law is on a fast track for approval by the Iraqi Parliament within the next 2-3 months, and the Bush administration is leaning heavily on the Iraqi government for quick passage. October 1, which is the date that the Democrats set for the Benchmarks, is too late. The Iraqi oil law will be completed in 2-3 months.

Last week, Representative Dennis Kucinich authored a Dear Colleague letter to Representatives urging them to remove this benchmark from the law. Democratic leadership reportedly debated it behind closed doors, but ultimately has left the reference to the law in. Representative Kucinich has vowed to offer an amendment to strip the language, but Democratic leaders are likely to rule it out of order. Looks like the Dems are all bark and no bite when it comes to taking on what Big Oil wants most.

TAKE ACTION to stop US support of the oil law

Finally, for the legal minded, there are some who argue that the Supplemental contradicts itself re: the oil law. Chapter 3, Sec. 1311, Para 2 says:

None of the funds appropriated or otherwise made available by this or any other Act shall be obligated or expended by the United States Government for a purpose as follows:

(2) To exercise United States control over any oil resource of Iraq.

which despite how lovely that sounds, is actually the objectionable language.

For background on the Iraqi Oil Law, please click here.

Meanwhile, the House of Commons in Britain is trying to support the right of the Iraqis to make their own decisions regarding their oil.