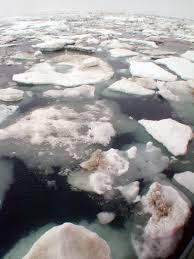 This winter in the northern hemisphere was the warmest on record, the US government has admitted. The National Oceanic and Atmospheric Administration said the combined land and ocean temperatures from December to February were 1.3 degrees Fahrenheit above average for the period since record keeping began in 1880.

During the past century, global temperatures had increased at about 0.11 degrees per decade. But that increase has been three times larger since 1976, NOAA’s National Climatic Data Centre reported.

Meanwhile, the warming has got so great that the collapsing Arctic sea ice “has reached tipping-point.” Scientists are attributing the loss of some 38,000 square miles of sea ice – an area the size of Alaska – to rising levels of carbon dioxide in the atmosphere as well as to natural variability in Arctic ice.In recent years the rate of melting has accelerated and the sea ice is showing signs of not recovering even during the cold, dark months of the Arctic winter. This has led to even less sea ice at the start of the summer melting season.

Mark Serreze, a senior glaciologist at the University of Colorado at Boulder, said the world was heading towards a situation where the Arctic will soon be almost totally ice-free during summer, which could have a dramatic impact on weather patterns across the northern hemisphere.

“When the ice thins to a vulnerable state, the bottom will drop out and we may quickly move into a new, seasonally ice-free state of the Arctic,” Dr Serreze said. “I think there is some evidence that we may have reached that tipping point, and the impacts will not be confined to the Arctic region,” he said.