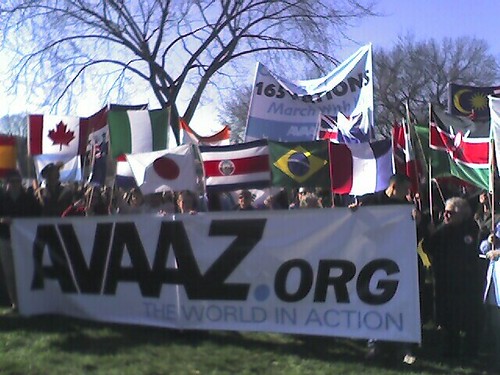 The video features George Bush, Vladimir Putin and Jacques Chirac in bed, fast asleep. All around them the evidence of climate change is clear and pressing but nothing rouses them from their slumber.

“Global warming is here, but our leaders just won’t wake up,” says a voice. “Now you can sound the alarm. Go to avaaz.org to send your leader a wake-up call.”

These adverts will be broadcast this week in Paris, Berlin, Washington and Delhi, represent the opening salvo of a new movement of online activists that already claims to have almost 900,000 members in 198 countries.

They aim to change the world by forming a grassroots organisation with a global reach that can campaign on issues ranging from climate change to Aids in Africa.

“We have been inspired by watching those moments of global consciousness such as the aftermath of 9/11 and the run-up to the Iraq war,” said Ricken Patel, one of the founders of Avaaz, which means “voice” in several Asian languages. “We are trying to build that sort of infrastructure online and to reduce the gap between the world people want and the world we have.”

“Climate change is a pretty classic example of a global problem that requires a global solution,” says David Madden, another of Avaaz’s founders and an activist previously involved in the Australian group GetUp.org.au. “We are asking people to send world leaders a wake-up call. The post-2012 stage of Kyoto is too important to be left to bureaucrats. World leaders need to get down to business.”

See the video and sign the online petition here.