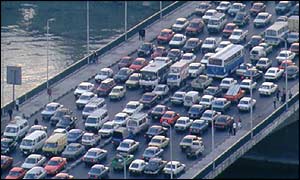 In January Germany takes over the Presidency of the G8 and EU. German Chancellor Angela Merkel has made addressing climate change a high priority on Germany’s agenda for its EU and G8 presidencies that begin in January.

Now two German energy experts are pushing a radical solution to climate change and rising oil demand: “simply set a date, at the next G8 summit, by which oil-powered cars would no longer be licensed in major industrialised countries”, they argue.

Volker Perthes and Friedemann Müller from the German Institute for International and Security Affairs believe that “such a decision would have a strongly positive economic and geopolitical impact”.

They argue: “Only the world’s political and economic heavyweights, the main industrialised countries that remain by far the biggest consumers of hydrocarbons, can initiate change on a global scale. Change must begin in the transport sector, which accounts for more than half of current oil consumption – a share that is likely to rise in the future”.

“The G8 countries should therefore agree to no longer license any new, oil-powered cars from 2025 onwards. This decision would not be directed against individual mobility, but against the dissipation of a scarce resource that is more urgently needed to produce synthetic materials”.

They argue that political leaders should provide the automobile industry with incentives to develop alternative technologies that rely on biomass fuel, ethylene, hydrogen, and even natural gas during a transition period. Countries that lead the way politically will, as a collateral benefit, provide domestic industries with a leading position in energy technology, ensuring future markets.

They conclude: “curing our ‘addiction’ to oil would leave more of it to poorer, less developed, and newly industrialising countries, as well as pushing down prices and easing geopolitical energy competition”.

They urge Germany to take the lead: “As a technologically advanced and major automobile-producing country, Germany is well placed to bring about such an initiative. Merkel, who holds a doctorate in physics and started her political career as an environment minister – presiding in 1995 over the first conference of the UN Framework Convention on Climate Change – may have more credibility in addressing the issue than any of her EU and G8 colleagues. Now is the time for a bold act of leadership”.