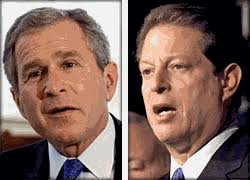 Ex-Vice President, Al Gore, in the UK to promote his film on climate change, An Inconvenient Truth, has made his strongest attack yet on George Bush, describing his administration as “a renegade band of rightwing extremists”.

Showing a level of emotion that was widely lacking during his failed presidential bid in 2000, he now says of climate change:”The scientists are virtually screaming from the rooftops. The debate is over! There’s no longer any debate in the scientific community about this. But the political systems around the world have held this at arm’s length because it’s an inconvenient truth, because they don’t want to accept that it’s a moral imperative.”

He adds: “This could literally end civilisation. I know it sounds alarmist, as if this is hyperbole, like a man with a white beard holding a placard, saying the end of the world is near . . . but this really is a planetary emergency.”

So a right-wing extremist who doesn’t believe in climate change in charge during a planetary emergency. Isn’t it time for a regime change..