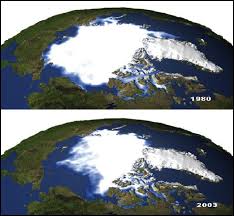 Record amounts of the Arctic ocean failed to freeze during the recent winter, new satellite figures show. This spells disaster for wildlife and strengthens concerns that the region is locked into a destructive cycle of irreversible climate change.

Satellite measurements show the area covered by Arctic winter sea ice reached an all-time low in March, down some 300,000 square kilometres on last year -an area bigger than the UK. If the cycle continues, the Arctic could be ice-free by 2030.

Walt Meier, a researcher at the US National Snow and Ice Data Centre in Colorado said: “For 800,000 to a million years, at least some of the Arctic has been covered by ice throughout the year. That’s an indication that, if we are heading for an ice-free Arctic, it’s a really dramatic change and something that is unprecedented almost within the entire record of human species.”