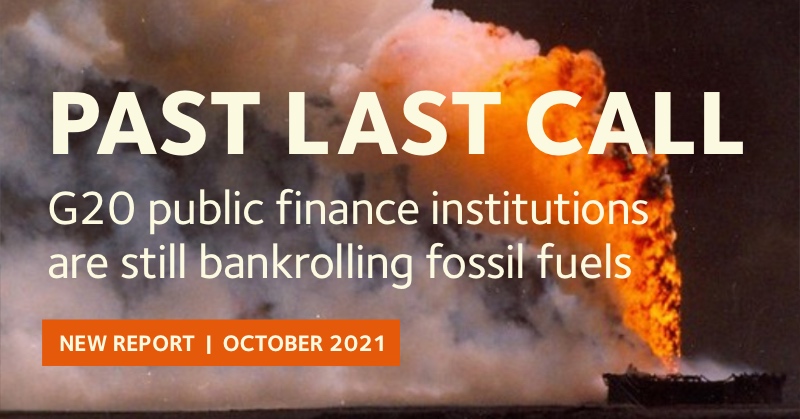 Our new report “Past Last Call: G20 public finance institutions are still bankrolling fossil fuels” looks at G20 country and MDB public finance for fossil fuels from 2018-2020 for the first time and finds they are still backing at least USD 63 billion per year in oil, gas, and coal projects. This was 2.5 times greater than their $26 billion a year in support for renewable energy in the same period.

In 2018-2020 G20 countries and the multilateral development banks (MDBs) they govern provided at least USD 63 billion per year in international public finance for oil, gas, and coal projects. This fossil fuel finance was 2.5 times more than their support for renewable energy, which averaged less than $26 billion per year.

This continued support for fossil fuels from trade and development finance institutions counters G20 countries’ commitments under the Paris Agreement to align financial flows with a safe climate future as well as their 2009 commitment to phase out fossil fuel subsidies. It also undermines the effectiveness of climate finance, which is still not delivered at either the scale promised ($100 billion per year from 2020) or needed. Public finance has an outsized impact on global energy systems, providing below-market rates and decreasing financial risks that make projects much more likely to go forward — something that is increasingly influential as the industry faces unprecedented global headwinds. Recognizing this impact, most G20 countries have ended support for coal or will by the end of 2021. Some momentum is now building to end public finance for oil and gas as well, with the UK and European Investment Bank (EIB) passing policies that limit almost all of this remaining fossil fuel finance. COP26 is an important opportunity for other countries around the world to join them.

Using Oil Change International’s Shift the Subsidies database, this briefing builds on past reports Talk is Cheap and Still Digging, which covered 2012-2018 to publish new international public finance data for 2019 and 2020. It looks at the energy project finance of G20 export credit agencies (ECAs), development finance institutions (DFIs), and multilateral development banks (MDBs). Due to gaps in reporting and increased flows to financial intermediaries that are more difficult to track, it is important to note these figures are underestimated. Our analysis shows that:

We also map government and institution-level restrictions for finance for fossil fuels and find:

As part of their fair share to limit warming to 1.5°C and ensure a liveable future, G20 governments and the MDBs they control must: