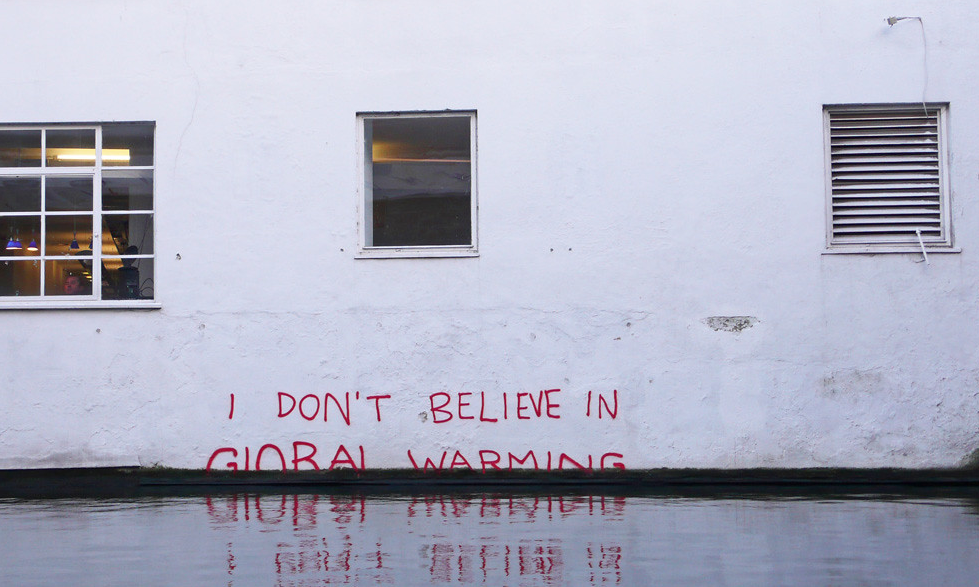 As so often, where tobacco leads, big oil and its lackies follow. The tobacco industry honed its tricks of the trade for decades as millions died. It denied the evidence. It sowed doubt and confusion.

It fought a war on truth itself.

As the decades flowed from one to another and the industry’s credibility crumbled, it was no longer seen as a trusted source. It was increasingly seen as a messenger of death and disease.

Once again, the tobacco industry, as cunning as a cornered fox, circumvented its credibility problem by using other voices to spin its deadly message. Again the playbook came into action: the industry used front groups, and third parties to front its campaign of deception and doubt.

So the industry played another tick: You no longer saw merchants of death, you saw doctors in white-coats. You no longer read about rich tobacco barons, but of struggling tobacco retailers. The industry practiced public relations to perfection. And front group after front group was born. When one was exposed for what it was or lost all credibility, another one would take its place.

And Big Oil has followed loyally in the steps of its Big Tobacco. It replicated the playbook.

As the evidence mounted that burning fossil fuels was causing climate change, the industry started funding an army of denial. It sowed confusion and obfuscation. And it found willing mouthpieces from the political right and its libertarian friends, who were all too eager to take its dollar.

And did the money flow. In the tens of millions of dollars. So even though climate science has largely been settled for decades, for years the public largely remained confused. And all the while, the earth began to burn.

We know much of the climate denial industry due to the likes of a dedicated bunch of academics and activists such as Naomi Oreskes, Greenpeace’s Exxon Secrets (unfortunately no longer active), Union of Concerned Scientists, the Pulitzer Prize-winning InsideClimate team,  Robert Brulle, and Michael Mann. Other key researchers are old colleagues such as Kert Davies and Cindy Baxter.

Eight years ago, Baxter, once labelled by the Guardian newspaper as the “Antipodean scourge of the oil industry,” wrote a report for Greenpeace entitled Dealing in Doubt.

In the U.K., over those last twenty five years, the climate denial machine has seen many manifestations.

Let’s go back to the mid-nineties, when the fossil fuel-funded Institute of Economic Affairs released a report by Julian Morris and Roget Bate entitled “Global Warming: Apocalypse or Hot Air” in 1994.

Most of the references in the chapter on science were other climate skeptics and deniers, an insulated bubble of denial referencing each other to try and gain credence and credibility. Except of course — it did not have any.

Although it was dismissed as “uninformed” and “hard to take seriously” by the experts, Morris and Bate would continue to dominate the climate denial debate for a decade in the UK.

Soon Bate and Morris were on the move again, shape shifting their way out of trouble and trying to stay one step ahead of the truth catching up with them.

Together, they formed the innocuously sounding International Policy Network, which took Exxon’s funding to carry on sowing doubt and confusion.

As the IPN imploded into oblivion after a few years, another organization appeared out of the ashes to lead the denial fight: the Global Warming Policy Foundation (GWPF), founded by the economist Lord Lawson. Lawson, we should point out has always denied taking oil industry money, has also never disclosed the source of his funds, and the GWPF and his cabal of like-minded deniers.

In his book on climate denial, an “Appeal to Reason” Lawson thanked those who had helped foment his thinking. It comes as little surprise that the IEA / IPN’s Julian Morris and long standing denier Richard Lindzen made the list.

“Perhaps the most surprising fact about global warming,” wrote Lawson in his book, “is that – despite carbon dioxide emissions rising faster than ever – It is not, at the present time, happening.”

For another decade, Lawson and his sidekick, an anthropologist, would push the denial message, often inexplicably given the same credence in the climate debate as scientists with hundreds of peer reviewed papers.

Eventually the truth caught up. In 2017, it was reported that the BBC had apologized for an interview with Lawson after admitting it had breached its own editorial guidelines for allowing him to claim that global temperatures had not risen in the past decade.

Like King Canute who could not hold back the tide, Lawson could not evade the evidence. Lawson and the GWPF had a growing problem; how to continue denying that temperatures were rising when the temperatures were getting hotter, with the last decade the warmest on record.

Indeed as NASA reports: “Nineteen of the hottest years have occurred since 2000, with the exception of 1998, which was helped by a very strong El Niño. The year 2020 tied with 2016 for the hottest year on record since record-keeping began in 1880.”

How can you keep saying the earth is not warming when quite clearly it is? How can you continue denying the evidence of climate change when everyday there is growing evidence of our climate emergency, in record fires and floods?

And so the deniers have had to shape shift again. They are dancing with the truth for one last time.

Gone is the Global Warming Policy Foundation. Arise the rebranded Net Zero Watch. It’s all the same people. Just a different strap line. They no longer want to talk science, but just argue for the status quo.

The deniers cannot deny the evidence any more, but what they can try and do is argue it’s too expensive to act on climate.

It is being launched as the IEA, the world’s energy watchdog in its latest annual assessment outlined that no new oil, gas, and coal extraction projects should be approved under a 1.5°C-aligned scenario.

It came weeks after the UN issued a code red for humanity over climate change.

The deniers have lost the argument on the science. They have lost credibility. They have nowhere to go. This is their last dance. Their last throw of the dice. The fact they have done it just before COP26 is no coincidence either, as they want to try and influence this crucial climate meeting.

But experts will not be fooled. Richard Black, senior associate at the Energy and Climate Intelligence Unit, told Desmog, who reported on the rebrand, “Given the escalating cost of climate impacts and the tumbling cost of zero-carbon, plus the constant public support for climate solutions, GWPF will inevitably lose on this one, too: You can rebrand, but lipstick on a pig will always be obvious.”