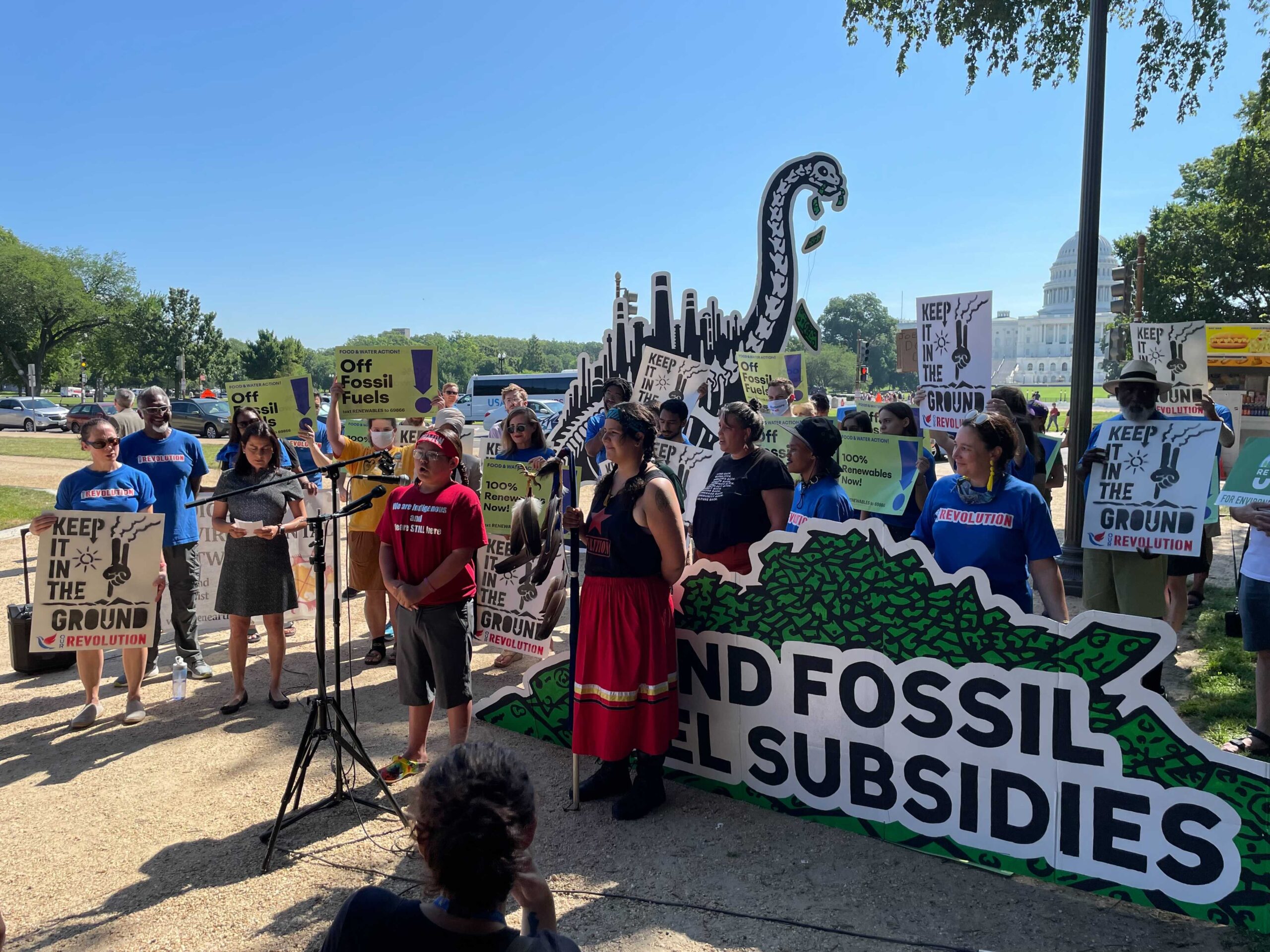 Over 500 Groups Call on Congress to Eliminate Fossil Fuel Subsidies with Letter, Rally, Petitions in Week of Action

WASHINGTON, DC — Over 500 organizations, including Oil Change International, Sierra Club, Oxfam America, Greenpeace USA, Friends of the Earth Action, Food & Water Watch, NRDC Action Fund, and a wide range of health, faith, environmental and other groups across the United States released a letter today calling on congressional leadership to eliminate the fossil fuel subsidies embedded in the U.S. tax code. They also staged an in-person rally on the National Mall urging Congress to ensure that fossil fuel subsidy removal is included in any major legislation advanced this year.

“It is past time to remove the burden of dirty energy support from the public and instead turn the efforts of the government to supporting clean energy and the jobs it generates. Action now will help us protect the climate, promote a more equitable, clean energy economy for America, and strengthen international leadership.”

In addition to the joint letter to Congress, activists delivered nearly 150,000 petitions calling for an end to fossil fuel subsidies to senators and representatives as part of the End Fossil Fuel Subsidies Week of Action, which is ongoing.

“Deadly public subsidies to Big Oil, Gas, and Coal have been driving climate chaos and harming frontline communities for far too long,” said Collin Rees, Senior Campaigner at Oil Change International. “The success of the clean energy transition will hinge on whether we’re able to wind down the political power of the fossil fuel industry — eliminating subsidies to oil, gas, and coal companies is a key first step.”

The groups cite Pelosi’s and Schumer’s own calls for eliminating subsidies, writing:

“In 2011, you rose [..] in support of eliminating a raft of fossil fuel subsidies. You highlighted the injustice and destructiveness of these giveaways to an industry responsible for the destruction of communities, nature, and climate. Fossil fuels are outdated energy sources that produce enormous levels of pollution that harm our communities, natural areas, and climate. These impacts fall hardest on historically marginalized communities, including Black and Indigenous communities.”

In 2011, Speaker Pelosi said on the House floor, “It’s long past time to turn off the spigot of public funds flowing to Big Oil…so I rise to ask my colleagues today: Should the American taxpayers continue to subsidize Big Oil’s profits?”

Likewise, Senator Schumer said on the Senate floor, “You don’t have to worry about [the fossil fuel industry’s] desire to explore. They are looking every place they can. They don’t have to have a subsidy to do it…so the time to repeal these giveaways is now.”

Fossil fuel subsidies are not only a gross taxpayer abuse, but also help incentivize the development and operation of oil and gas wells that heavily impact the health of communities around the country, as new research from the Stockholm Environment Institute clearly shows. The Biden Administration’s budget aims to cut $120 billion in fossil fuel subsidies over the next 10 years, and momentum is growing on Capitol Hill, with both the Clean Energy for America Act and the End Polluter Welfare Act gaining steam.

“Using taxpayer money and government resources to support the burning of fossil fuels is helping industry harm us,” said Sujatha Bergen, senior advisor to the NRDC Action Fund. “It is well past time to end taxpayer support for these wasteful and outdated technologies that are so destructive to communities and nature.”