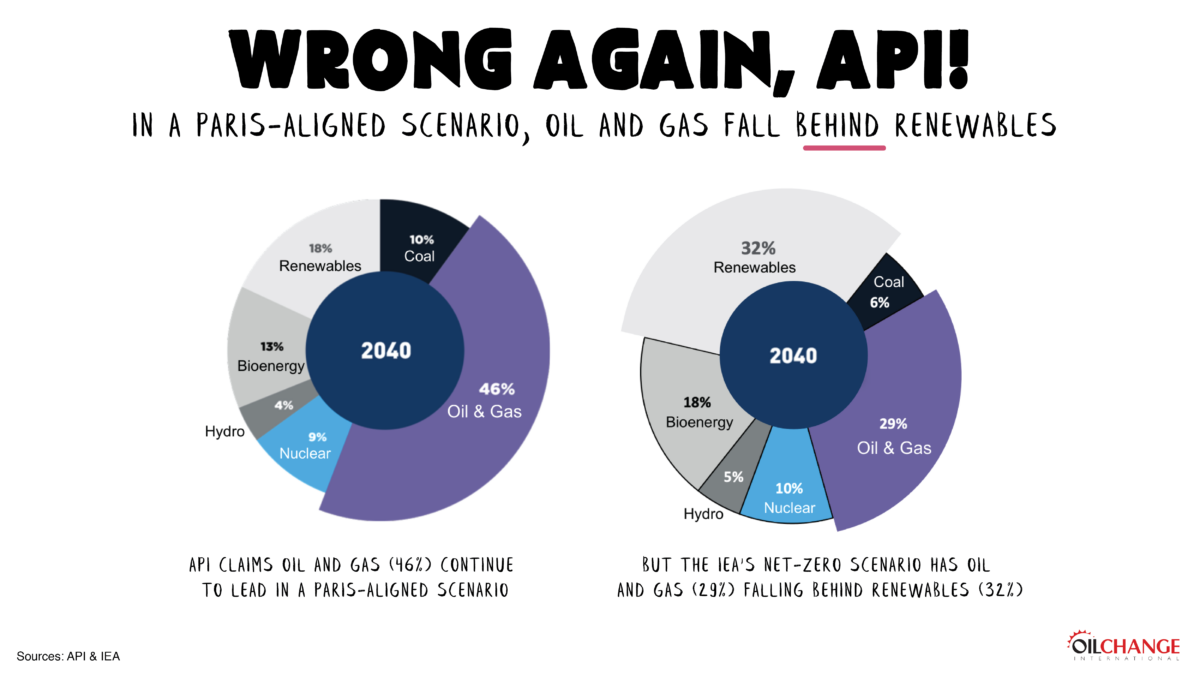 The American Petroleum Institute (API) is in the midst of an increasingly desperate effort to rebrand the oil industry as climate friendly. In March of this year, API launched a new “Climate Action Framework”, which it describes as a “robust policy framework of industry and government actions to address the risks of climate change while meeting the world’s long-term energy needs.”

If you’re familiar with API, you probably won’t be surprised to hear that the urgent need to reduce the production of oil and gas is nowhere to be seen in this document. Indeed, at the center of this “framework” is a statement and graphic about oil and gas, or rather “natural gas and oil” (you see what they did there?) remaining the leading source of energy globally in a Paris-aligned scenario. 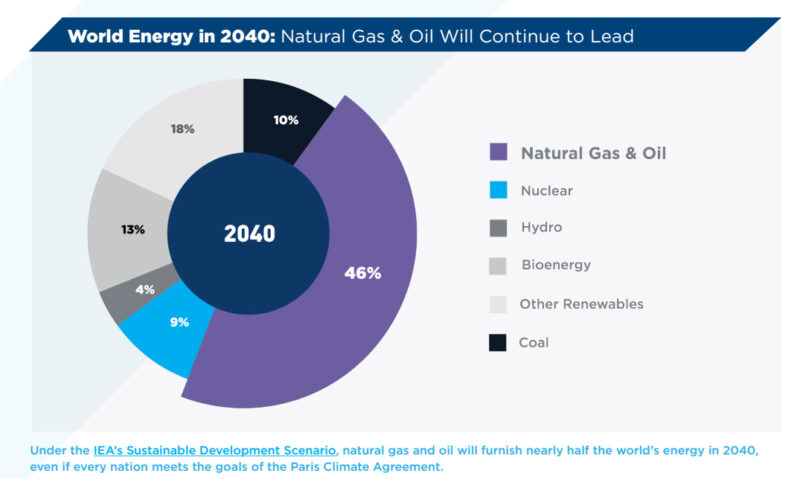 The numbers are based on the International Energy Agency’s Sustainable Development Scenario (SDS), from its annual report the World Energy Outlook (WEO). So it’s legit, right?

Wrong! For years, my colleagues at OCI have, together with international partners, called out the IEA for presenting the SDS as a Paris-aligned scenario. We calculated that the fossil fuels in the SDS would exhaust the global 1.5C carbon budget by the early 2030s. The IEA claimed that the SDS would deliver the Paris goals. But we exposed that it was dependent on an assumption of massive reliance on negative emissions from unproven technologies in the second half of this century.

Since 2015, we have been calling on the IEA to #FixTheWEO by aligning the climate scenario with the Paris goal of limiting warming to 1.5°C, and making that scenario central to the annual report. In doing so, the IEA could end the decades-long practice of energy companies and investors citing a climate-busting business-as-usual energy forecast to justify further investment in fossil fuels.

In its Net Zero by 2050 report, the IEA has finally released its first ever fully fledged energy scenario aligned with the urgent goal of limiting global warming to 1.5C. There are some issues. It remains over-reliant on unproven technologies like carbon capture and storage (CCS) and unsustainable levels of biofuels, among other things. But it is also a massive step forward that makes clear what we have been saying for years. That is, in the IEA’s words, that “(t)here is no need for investment in new fossil fuel supply in (a) net zero pathway.”  As we have shown over and over again, the amount of fossil fuel in production is too much already – any expansion is incompatible with meeting the climate goals set in the Paris Agreement.

This does not mean fossil fuels must disappear overnight. But it does mean substantial reductions in production and use starting now. Indeed, by 2050 oil demand declines 75%, while gas declines 55%. These declines will have to be a lot more dramatic if unproven CCS technology fails to deliver.

So what should API’s graphic look like? We used data supplied by IEA in the Net Zero report to redo it. API chose 2040 as this was the end year of the IEA’s SDS scenario. What we found is that by 2040, oil and gas fall to 29% of global energy supply (from 55% today), and renewables rise to 32%. It is not oil and gas that provide the largest share of energy in 2040, but wind, solar, geothermal and other renewable energy sources. Combined with biofuels and hydro, renewable sources provide over 55%. By 2050, that increases to 67%. 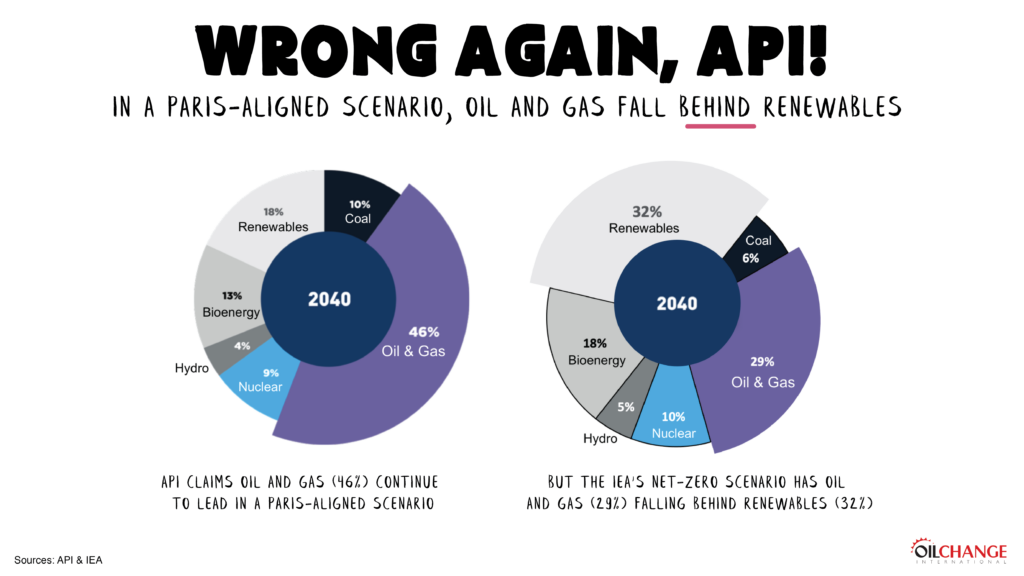 API insists that oil and gas companies can carry on drilling as normal in a climate scenario. Especially if they clean up on methane emissions and increase the use of carbon capture. But IEA’s scenario includes a massive 75% decrease in the oil industry’s methane emissions by 2030, and a super-ambitious 19000% increase in CCS by 2050. Those are going to be hard to achieve. So it’s clearer than ever that oil and gas use must decline dramatically.

But don’t expect API to tell you that.