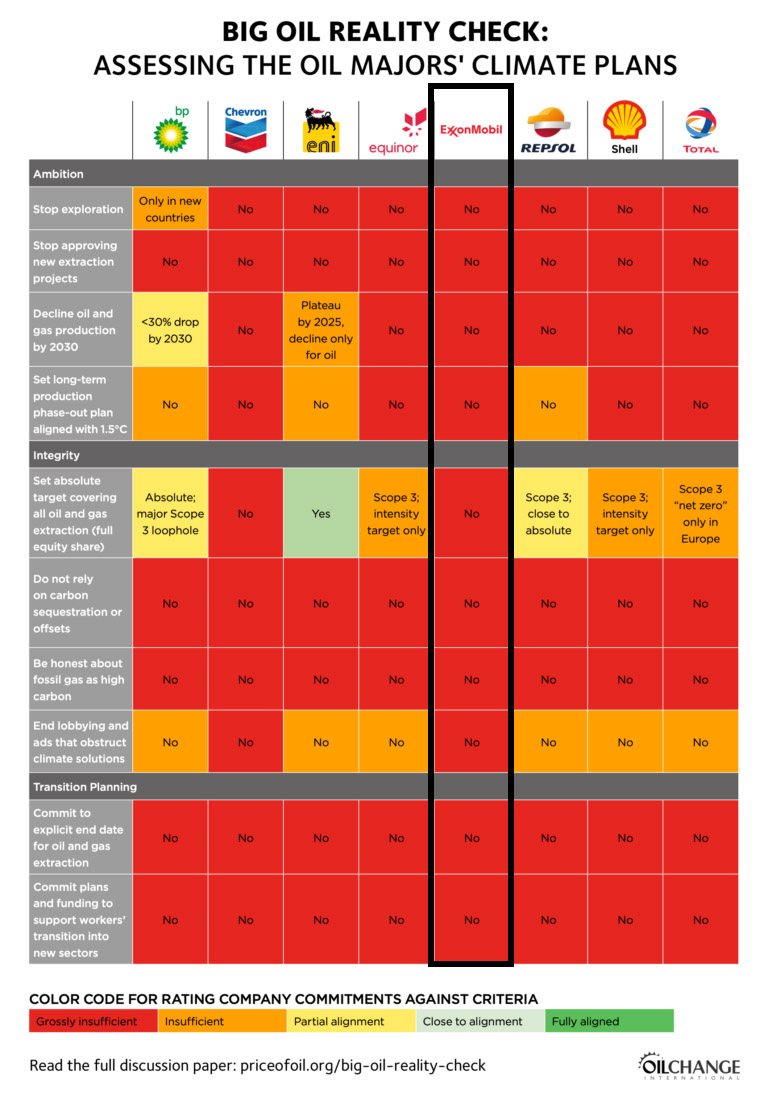 In January, ExxonMobil released its so-called “2021 Energy and Carbon Summary.” In it, the company attempts to detail its commitments related to climate change. For the first time ever, ExxonMobil reports on its so-called “Scope 3” emissions (the emissions that result from the use of the products it sells, i.e. burning fossil fuels). And earlier this week, it followed up by announcing the creation of a new line of business dubbed “ExxonMobil Low Carbon Solutions,” focused on carbon capture and sequestration programs.

However, it’s important to avoid taking the document and recent announcement at face value. After a tumultuous year for the oil and gas industry that ended with ExxonMobil writing down an unprecedented USD 20 billion in fossil fuel assets, it’s fair to assume the company will be doing what it can to bolster its image for investors and the public.

So let’s dive under the hood and see the grim reality that ExxonMobil is hiding in this document and recent announcement.

Conveniently, we at Oil Change International have a handy set of metrics to judge it by, thanks to our Big Oil Reality Check discussion paper published last September — endorsed by 30 other organizations worldwide. In Reality Check, we set out ten minimum criteria that an oil and gas company’s climate plans would need to meet for the company to even have a chance of aligning with the 1.5-degrees Celsius (ºC) goal set out in the Paris Agreement.

We built our Reality Check analysis on two key premises. The first is that extracting and burning only the oil and gas in existing fields would blow our emissions budget for 1.5ºC, even if coal use ended overnight. We are beyond the point where we can focus on cutting one fossil fuel at a time. Reality Check included a 2020 update of our 2016 The Sky’s Limit analysis, as shown below: 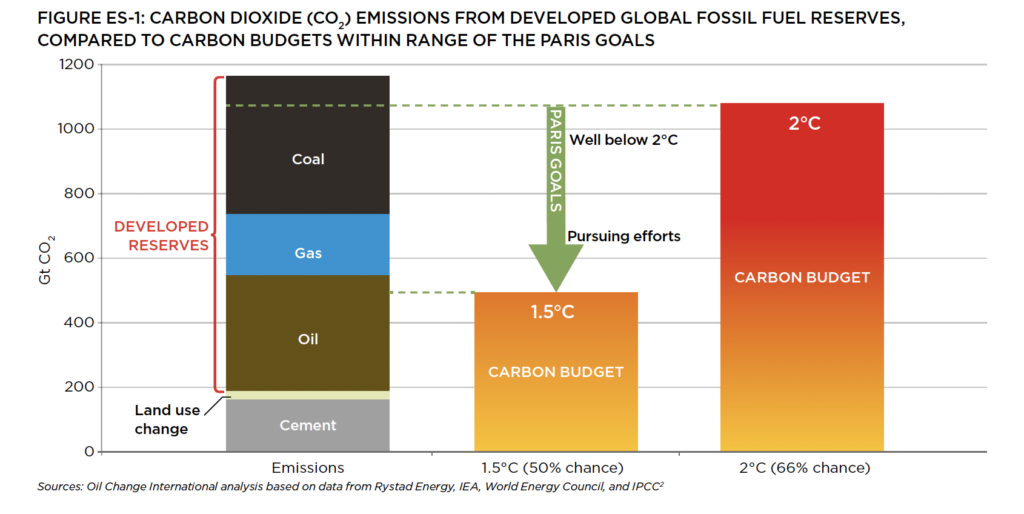 Second, though a lot of companies and countries choose to focus their targets far into the future, 2030 not 2050 must be the first test of ambition. The IPCC’s Special Report on Global Warming of 1.5 Degrees made it clear that to limit warming to 1.5°C with little to no overshoot of that threshold, we should halve global carbon pollution by 2030. The decisions that happen now matter. If fossil fuel pollution continues to rise this decade, we could reach net zero by 2050 but still blow far past 1.5ºC. 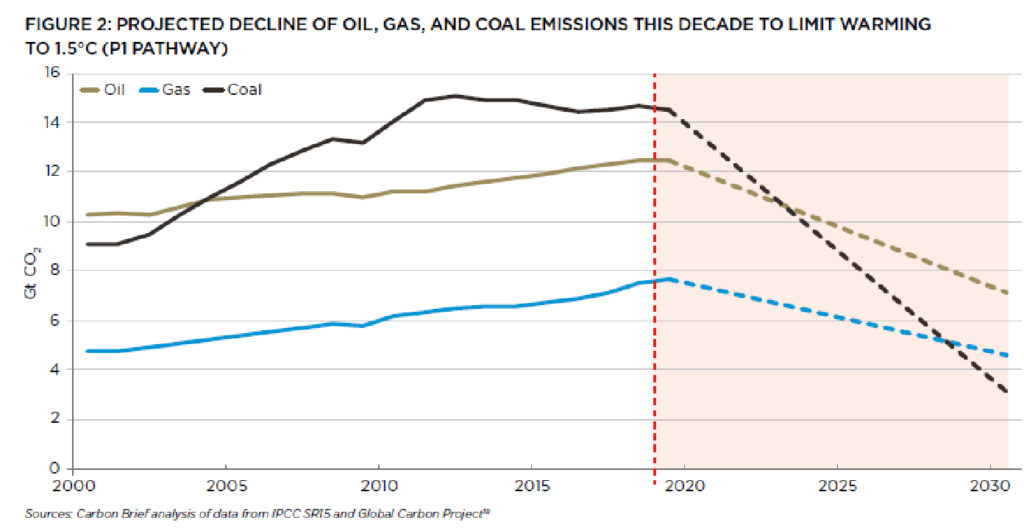 The pace at which oil, gas, and coal start declining in this decade will determine global success or failure in meeting the Paris goals.

From these starting points, and in consultation with our partner organizations, we identified ten key minimum criteria and assessed eight of the biggest integrated, publicly-traded oil and gas companies against these benchmarks. Not one of the companies came anywhere close to even a possibility of aligning with 1.5ºC, as shown below. There was a gap between the least worst and the worst, but a much, much bigger gap between all companies’ plans and the bare minimum for 1.5ºC-alignment. 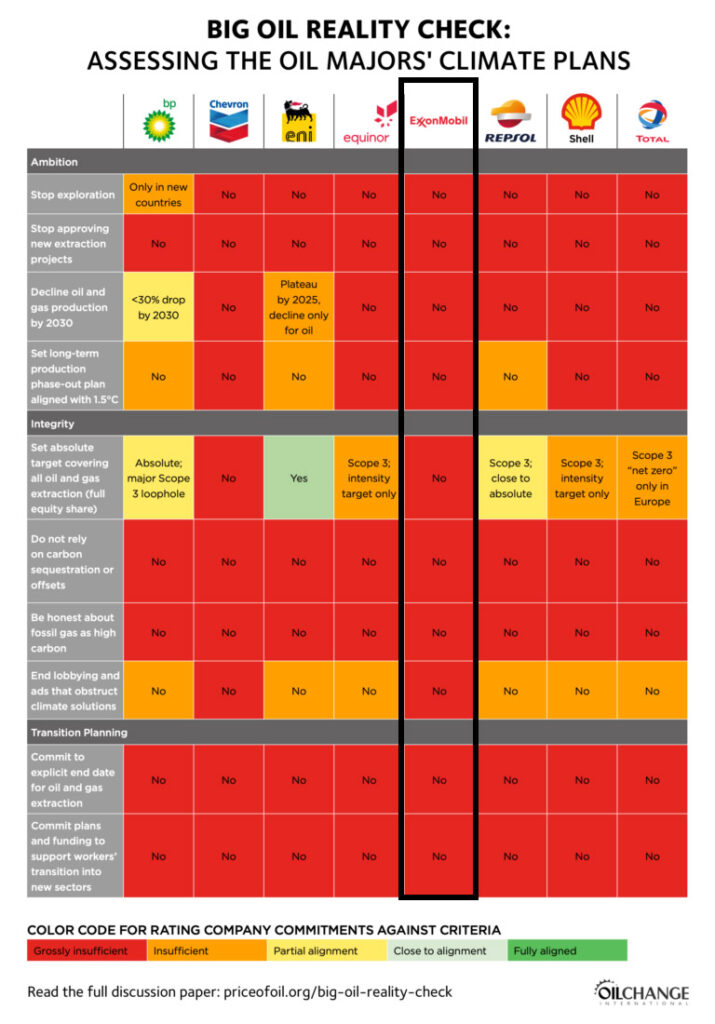 ExxonMobil is still searching for more oil and gas that can never be burned. It is still planning new extraction projects, and has no plans to decline production or develop at 1.5ºC-alignment long-term phase out plan. In fact, in the Frequently Asked Questions section of this new document at page 45, ExxonMobil tries to claim that it can align with the Paris Agreement without cutting production.

Even now, the company has no absolute emissions reduction target, let alone one covering all oil and gas extraction on a full equity share. All ExxonMobil has started to do now is publish an assessment of its scope 3 emissions (its supply chain emissions, including the emissions from its customers burning the oil and gas it produces). That’s a tiny step toward transparency — but without a plan to actually cut these emissions, it means very little. It’s not enough to report on these emissions without cutting them. People and communities are demanding ExxonMobil stop producing more of the fuels that are cooking our climate, not to simply better report on precisely how much their products are cooking our climate.

Far from recognizing the risks of over reliance on carbon sequestration, carbon capture and storage (CCS), or offsets, ExxonMobil claims to be “a global leader in CCS,” devoting three pages in the carbon report to risky, speculative techno-fixes that are unproven at scale.

Their new announced “Low Carbon Solutions” effort only doubles down — if you can call spending less than 5% of their capital budget “doubling down,” that is — on the speculative CCS techno-fix. In reality, the new “business” announced this week is both meager and also much of the same from ExxonMobil; it even incorporates existing projects and attempts to repackage them as new, as Bloomberg reports.

The company’s failure across the board continues. ExxonMobil continues to falsely celebrate fossil gas (which is not a bridge fuel), and despite claiming to support climate policy, it remains a member of associations and organizations that lobby to obstruct climate solutions. The company still has no end date for oil and gas extraction, and no plans to secure a just transition for working people.

So, how is it that ExxonMobil claims to be aligning the Paris Agreement throughout its “Carbon Summary” report, while failing on all our baseline criteria for even coming close to aligning with the 1.5ºC target adopted in Paris?

There are two key aspects.

First, ExxonMobil fails to engage with the difference between 1.5ºC — well below 2ºC, and 2ºC targets — and attempts to falsely equate potential alignment with some 2ºC scenarios with aligning with Paris.

Second, the company depends on deeply flawed International Energy Agency (IEA) scenarios, known as SDS and STEPS, which do not align with 1.5ºC or with reaching a net zero target by 2050. This is despite the IEA including a new, net zero emissions mini-scenario in last year’s World Energy Outlook report, and announcing a new special report on net zero emissions in advance of the next UN climate talks.

What this means is that ExxonMobil is both distorting the goals of the Paris Agreement and distorting what it would take to meet those goals — all while obfuscating and hiding its own role in fueling this crisis.

If ExxonMobil was serious about listening to stakeholders or serious about climate action, it would announce a ramp-down of fossil fuel production in line with what climate science demands, and use its Scope 3 emission reporting to help stakeholders gauge progress in meeting that goal. Waffling on the feasibility of measuring Scope 3 emissions and perpetuating the myth of fossil gas as a bridge fuel only serves to further undermine any hopes of serious intentions rather than corporate public relations material in this effort.