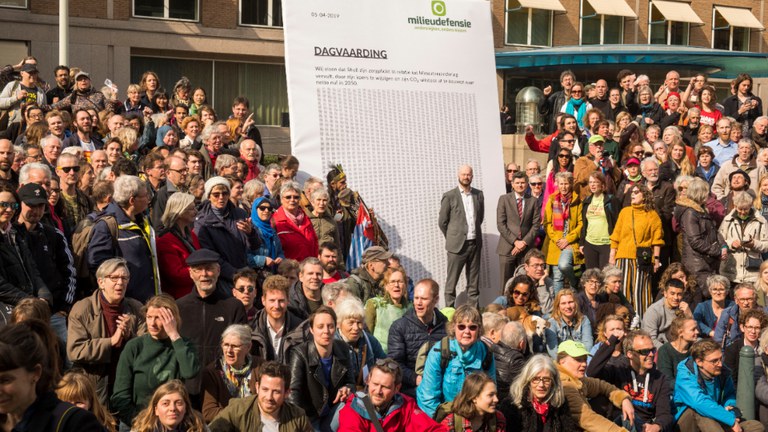 Despite several climate announcements over recent years, Shell’s business operations continue to contrast sharply with scenarios in which global warming is limited to 1.5ºC. Shell plans to continue to increase oil and gas production in the coming decade, the decade during which the world must cut global emissions in half, and oil and gas production needs to decline by 4% and 3% respectively each year. As Shell faces a climate lawsuit in the Dutch Court this month, this blog takes a closer look at the company’s climate ambition alongside its fossil fuel production plans. Yet again, it becomes clear that Shell is on a collision course with climate disaster.

On the contrary, Shell’s projected capital expenditure (CAPEX) and production point to continued growth. The numbers show that Shell plans to keep current production levels until 2034 and continue investments in new fossil fuel production even up to 2050.

Shell’s net-zero target, which in and of itself is insufficient to limit global warming to 1.5ºC, is misleading as it does not cover the biggest chunk of Shell’s emissions, which are the emissions that are caused by burning the oil and gas that Shell sells (the so-called scope 3 emissions). Shell itself recognizes that this target, which only covers scope 1 and 2 emissions, “covers less than 15% of the greenhouse gases associated with our energy products”. For its Scope 3 emissions, Shell has set only a “Net Carbon Footprint” target of 30% by 2035 — which is a target focused on reducing emissions per energy unit sold rather than reducing overall emissions.

Shell can reach this target even if it increases its overall emissions, simply through producing and selling more renewable energy to bring down the average emissions of the energy products it sells or through relying on risky and unproven carbon sequestration and offsets. In such a scenario, Shell will not have to reduce the quantities of oil and gas produced or sold, meaning no actual emission reductions are guaranteed. But as the graph below (figure 1) shows, even in the best case scenario, in which Shell achieves the intensity target through phasing-down its oil and gas activities, the reduction achieved would not be sufficient for 1.5ºC.

Figure 4 below shows that if Shell were to proceed only with production of oil and gas from the existing fields, it would achieve a 40% reduction in CO2 emissions by 2030 compared to 2020 levels. If Shell were to proceed with existing fields and the fields that are currently under construction (post-FID) its emissions would decrease by 34%. If Shell would also continue with the production from discovered and undiscovered fields this would lead to an increase in CO2 emissions by 4% by 2030 compared to 2020 levels.

In Shell’s presentation of its Q3 results, Shell revealed that it is planning to focus on nine countries and/or regions that will receive 80% of Shell’s upstream CAPEX: Nigeria, Brazil, Gulf of Mexico, the Permian Basin, the United Kingdom, Kazakhstan, Oman, Malaysia, and Brunei. Figure 5 below shows the expected CO2 emissions from projected production (producing, under development, discovery and undiscovered) from these core positions up until 2035.

Figure 6 below shows the potential CO2 output from Shell’s core positions if Shell were to stop investing in new project development now. This shows only the projected production from fields already developed or under construction. These are emissions that are already ‘locked in’ by existing capital investment in these countries and will occur unless Shell agrees to — or is compelled to — manage a decline in existing production. It also shows that if Shell were to stop investing in expanding production in these countries, its production from these fields would show a gradual decrease but would still continue up to 2050.

All in all, whilst the need to reduce oil and gas production to meet climate goals is becoming ever more clear and urgent, since Shell launched its first climate ambition in 2017, it has not significantly improved either its climate plans or its climate performance. Instead, Shell plans to increase production until at least 2032 and Shell’s prospective CAPEX indicates billions of dollars of financing for continued expansion. As staying below 1.5ºC requires a sharp reduction in oil and gas production by 2030, this is wholly inconsistent with climate goals.

Without a meaningful plan to stop expansion and begin an ambitious managed decline of oil and gas production, Shell (and its peers) continue to directly undermine our chance to stay below 1.5ºC.