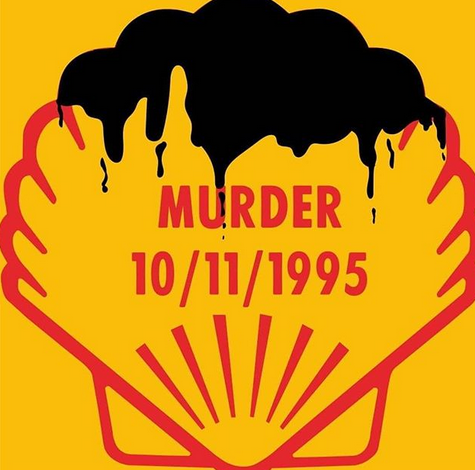 And so another grim, painful milestone is reached. It is now a quarter of a century since the Ogoni 9 were murdered in Nigeria.

In the twenty five years that have followed, there has been unrelenting campaign to hold Shell accountable for its actions.

It is not possible to put into words what this actually has entailed for those on the frontline of the struggle.

Pause for a moment. For many, 1995 was a different era, when the internet was still in its infancy, long before everyone had mobile phones. It was the year that Microsoft launched its first operating system, Windows 95. It was nearly a decade before Facebook was created. It was a different century. A different time.

Like many, I knew Saro-Wiwa, the charismatic writer and Ogoni leader and used to meet him in London on his visits there in the early nineties.

I remember his infectious optimism when he talked about confronting Shell over its pollution and how he was demanding royalties for the oil drilled under Ogoniland and that the oil giant clean up its mess.

He dismissed concerns over his safety. “They couldn’t really arrest me now,” he once told me. “But they could organize an accidental death or something of that sort. But I am not too worried by that.”

If I close my mind and hold still, I can still hear Ken’s infectious laugh. Even now, in a different time and a different place, it haunts me.

In his closing speech to the Tribunal, Ken had said: “I and my colleagues are not the only ones on trial. Shell is here on trial and it is as well that it is represented by counsel said to be holding a watching brief. The Company has, indeed, ducked this particular trial, but its day will surely come … The crime of the Company’s dirty wars against the Ogoni people will also be punished.”

There is so much wrong written into this story that it is sometimes difficult to unravel and articulate without anger overtaking words.

It is a spaghetti ball of rampant pollution, double standards, blatant colonialism, environmental racism mixed with collusion with the military made more noxious by corporate arrogance.

At the rotten heart of this ball is Shell. We have always said that Shell was guilty in the deaths of the Ogoni 9. A charge the company has always denied.

But slowly we unravelled the spaghetti. It took us a year to prove the company had been secretly paying the military.

But the years passed. In 2009, after legal action was brought by the Wiwa family, Shell settled out of court in the hours before the trial. It may be a corporate titan, but it was too timid to stand in court.

In the aftermath, we methodically went through the court depositions which provided new evidence of Shell’s financial and logistical involvement with the Nigerian military and the dreaded Lt. Col. Okuntimo who was guilty of much of the torture, rape, and pillage that the Ogoni suffered. The witnesses also revealed that Saro-Wiwa and the others had been framed.

We also knew that witnesses in Ken’s original sham trial had alleged they were bribed by Shell to testify against Saro-Wiwa. A charge the company has always denied. But the Wiwa case was not the only one against Shell.

In 2002, the widow of one of the other Ogoni 9, Esther Kiobel first sued Shell in the United States, where she had been granted asylum. Over ten years later, the U.S. Supreme Court ruled that it did not have jurisdiction over the case, meaning U.S. courts never got to examine the facts of the case, either.

Three years ago, Esther Kiobel filed a new civil case against Shell in The Netherlands, supported by Amnesty International. The case was brought along with other widows: Victoria Bera, Blessing Eawo and Charity Levula.

Last year, three witnesses stood under oath and one by one testified that they were bribed by Shell. Mark Dummett from Amnesty tweeted live from court:

The case resumed this year, although we still are waiting for a verdict. A quarter of a century may have passed but we still hold our breath.

We are still waiting.

The ever dogged Esther Kiobel remains determined as ever to have her husband’s name cleared. “This case will give a sense of belonging and hope to the countless victims of human rights abuses over the world,” she says.

It did not have to be like this. Shell could have stopped this from day one. Esther and the others should not have to wait this long for justice. Whatever happens now will come too late for others too. Other great Nigerians who are part of this story — Claude Ake, Oronto Douglas and Ken Wiwa — to name just a few, will never see the day Shell is found guilty.

In the years since, Shell has tried to shed its image of corporate killer like a snake would its skin. Realizing its image was stained with blood, Shell paid fancy public relations consultants millions to write warm words to place deceitful adverts about caring corporate values and how it was listening to criticism. But these words were as hollow as a decaying African drum.

For all the millions spent on weaselly warm words, a pittance was spent on action. The company has never cleaned up their mess. They have never admitted guilt or said sorry. The company could have tried to right the wrongs, grave as they were. Instead they chose profit over people. They chose indifference over action.

And the denial has passed from one Shell executive to another as the guilty retired to a life of luxury and those seeking justice and truth passed the baton to a new generation too.

At any one moment in those long twenty five years, there could have been one Shell executive who had recognized that it was never too late to try and heal the wounds, to have the corporate courage rather than cowardice in nothing else to simply apologize. Instead, Shell executives stood in their blood-soaked boardroom and spent money on spin doctors.

Earlier this month, the company was ridiculed on Twitter for yet another pointless PR campaign for asking “What are you willing to change to reduce emissions.”

The Congresswoman AOC summed up the feeling of many when she tweeted.

I’m willing to hold you accountable for lying about climate change for 30 years when you secretly knew the entire time that fossil fuels emissions would destroy our planet ? https://t.co/ekj1Va1Cp0

Shell has lied about climate change for 30 years. It has covered up its complicity in the murder for 25 years. At the same time, it wants us to believe that it has a role in our collective future.

We cannot have a just future built on the blood of the past. The oil industry has always been based on a bedrock of exploitation and racism — of modern day colonialism. You don’t have to walk the Niger Delta to know that, just look at the decades of injustice along the polluted communities in Cancer Alley.

So twenty five years on, we will hold Shell to account and keep on exposing the racism and atrocities that are a daily cost of our addiction to oil.

In the meantime, the vortex of violence continues: In Nigeria, in recent weeks new trouble has brewed with dozens killed in protests against the notorious police unit, the Special Anti-Robbery Squad (SARS), under the hashtag #EndSARS.

You could argue the seeds of this violence was sown decades ago, when Shell funded another notorious Police force, the Mobile Police Force (MPF). Whether the MPF or SARS, once violence is embedded in society, it becomes more endemic and harder to eradicate. Even now, Shell’s shadow hangs heavily on Nigeria.

But the message of today is that the struggle against Shell will continue with a new generation of activists leading the fight. One of those is Suzanne Dhaliwal, a climate justice campaigner and Director of No Tar Sands.

As Suzanne says: “It is essential we take time to honor the memory of the Ogoni 9 today, we stand in solidarity with the communities impacted by the colonial violence of Shell and the on-going and worsening social and ecological crisis.”

She continues: “The police brutality that has seen the rise of the ‘End SARS’ movement is at the core an on-going symptom of the violence that is connected to the ecological and social crisis, which is at the root of on-going colonialism and imperialism which led to the death of the Ogoni 9 25 years ago.”

“We hear much lip service to the words ‘climate justice’ however without our movements being in relationship to our environmental justice ancestors such as the Ogoni 9 and the on-going struggles in the Niger Delta and Indigenous Peoples’ globally we risk understanding what is really being asked of us at this time.”

Dhaliwal concludes by saying: “We must reflect on our movement history to understand the depth and complexities of these foundational ecological struggles. We must humble ourselves and imagine how we will honor the creativity, bravery and nuance of the Ogoni 9 as we co-create the future, and create movements that will shake the foundations of injustice.”