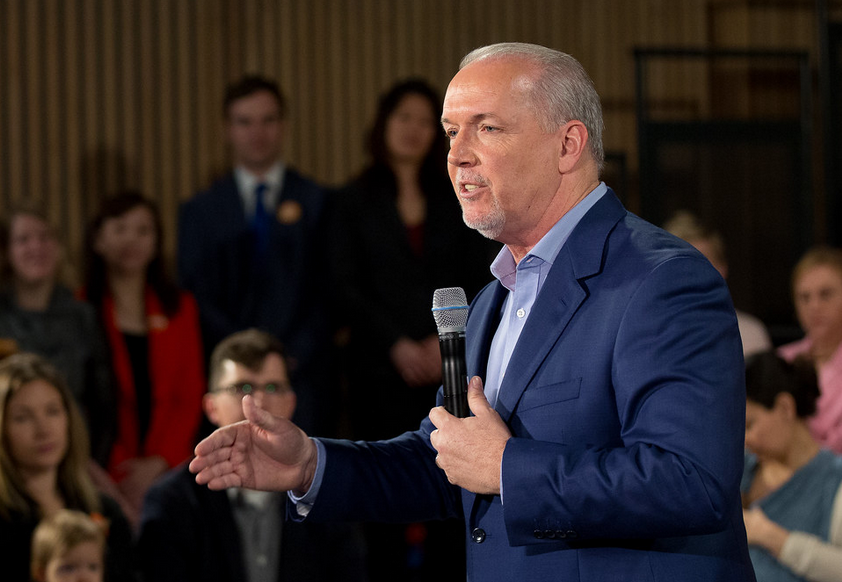 Running an election campaign in the middle of a pandemic was always risky, but for the Premier of British Columbia (B.C.), John Horgan, his gamble to hold an election seems to have paid off.

Preliminary results, according to CBC, show Horgan’s party, the BC NDP (British Columbia New Democratic Party) gaining 14 seats for a total of 55; the opposing right-wing BC Liberals taking 29, and the BC Green Party winning three seats.

The Canadian Press is reporting that Horgan is expected to form a “historic majority” government, the first time the NDP have had a majority since 1996.

Derrick O’Keefe, the cofounder and editor of Ricochet Media, wrote in Jacobin Magazine, “British Columbia has historically been dominated by right-wing governments…last weekend’s overwhelming New Democratic Party win is a significant moment.” He argues that Horgan now needs to be more “ambitious.”

Horgan has an opportunity to lead by example and respond to our climate crisis by divesting from fossil fuels and investing in renewables and justice-based solutions. Unfortunately, his last three years in power show the the stage is not set for that to happen.

O’Keefe notes that on environmental issues, Horgan is acting like a Liberal in disguise. “The party has, for example, expanded the regime of subsidies, in the form of tax and royalty breaks and cheap electricity, offered to the liquefied natural gas (LNG) industry in BC.”

Not only is Horgan’s support for LNG leading to climate catastrophe, but it is also an assault on First Nations rights and sovereignty.

The expansion of LNG exports means more fracking and pipelines, such as the Coastal GasLink pipeline, built across Wet’suwet’en lands. Earlier this year, there were nationwide protests against the disastrous and divisive pipeline.

It is not the only problematic LNG project. The Green Party candidate in West Vancouver Sea to Sky, who is predicted to win his seat, told the Narwhal that he “credits his tentative victory to rising concerns about intertwined environmental issues, including opposition to the planned Woodfibre LNG project owned by Indonesian billionaire Sukanto Tanoto.”

The Woodfibre LNG plant would be a climate disaster. The Pembina Institute estimates that the plant would add the equivalent of 170,000 new cars to B.C. roads each year.

The Greens remain the only party opposed to LNG project. “The overall consciousness around the climate crisis, and the action we urgently need to take on it, was probably at the forefront of most people’s minds,” Valeriote told the Narwhal.

He added: “It shows up in Woodfibre LNG and discomfort with government subsidies [for LNG and other fossil fuels] and the alternative things we could do with that public money. It shows up in the climate emissions aspect of Woodfibre LNG.”

As we wrote a year ago, under Horgan’s watch, LNG subsidies climbed. A report from International Institute for Sustainable Development (IISD) and Environmental Defence Canada found at least CAD 830 million in fossil fuel subsidies in the 2017-2018 fiscal year, and that B.C. has amassed at least $3.1 billion in outstanding royalty credits (these are foregone royalties that are to be paid back to industry instead of going to fund public services).

Additionally, Horgan has approved generous new measures to lower costs from well to wheel, including a federal-provincial agreement on the LNG Canada project that locks in subsidies for 20 years.

However, these subsidies could also be Horgan’s downfall. The movements for climate justice and Indigenous sovereignty in B.C. are mighty, and polling from Dogwood B.C. found a staggering 9 out of 10 NDP supporters said this “money could be better spent supporting [oil and gas] workers to transition into other industries.”

Tzeporah Berman, who is an Adjunct Professor of Environmental Studies at York University, and chair of the fledgling Fossil Fuel Non-Proliferation Treaty Initiative, noted last week that her home city of Vancouver had become the first city in the world to endorse the Treaty thanks to people-power. She wrote, “to address the climate emergency, the federal government and province of B.C. have committed to reach net-zero emissions by 2050. At the same time, they continue approving and funding oil and gas expansion at levels that make it impossible to meet these goals.”

To this end, Berman noted that it is “time for all of us to stop avoiding the hard stuff and work together to plan to wind down fossil fuel production.”

And that includes the newly elected John Horgan too. You cannot be a climate leader and bankroll LNG expansion at the same time. And land defenders and climate organizers are getting ready to force an end to LNG if you don’t do it yourself.