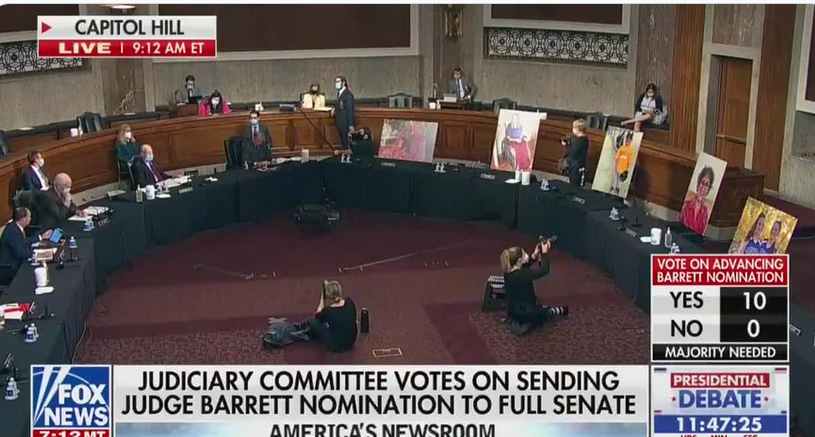 Symbolically, the Democrats boycotted the vote, to officially register their objections of Republicans fast-tracking the nomination of Barrett with only 12 days until the presidential election. In so doing, the Republicans broke Senate rules.

Her approval now appears certain with the full Republican-controlled Senate due to vote on Monday. Barrett will be President Trump’s third justice to the Supreme court, tilting its direction for a generation.

Democrats were scathing, “This is not a decision the members of the committee have taken lightly, but a Republican majority has left us no choice,” Senate Minority Leader Charles. E. Schumer (D-N.Y.) said during a news conference on the steps of the Capitol following the committee vote. “We are boycotting this illegitimate hearing.”

My Democratic Senate colleagues and I boycotted the Supreme Court nominee committee vote today. Let's be clear: this nomination process is a sham and shows how Republicans will stop at nothing to strip health care from millions of Americans with pre-existing conditions.

There are increasing concerns about the “illegitimacy” of Barrett’s appointment on numerous levels, but not least with increasing evidence that “dark money” has played a role in helping secure her appointment.

Just as we have seen dark money fund climate denial and undermine climate discourse, it now seems to be undermining American justice, too.

Last month, OpenSecrets reported that the “Judicial Crisis Network, a dark money group that operates as the preeminent vehicle for deep-pocketed conservative donors” had funded a multi-million  dollar advertising blitz.

According to OpenSecrets, JCN received USD 22 million in anonymous donations, including a secret $17 million donation from a single anonymous donor.

JCN is intricately linked to Trump’s judicial adviser, Leonard Leo, a longtime executive at the Federalist Society, the highly influential conservative and libertarian lawyers network based in Washington, D.C.

Leo is said to effectively control the JCN. His views are deeply worrying. Speaking to the Daily Beast, Tom Carter, who served as Leo’s media relations director when he was chairman of the U.S. Commission on International Religious Freedom (USCIRF), said “Leonard Leo was a visionary. He figured out twenty years ago that conservatives had lost the culture war. Abortion, gay rights, contraception — conservatives didn’t have a chance if public opinion prevailed. So they needed to stack the courts.”

The JCN also reportedly has ties to a number of other conservative groups with a vested interest in the Senate quickly confirming a Trump pick, including the National Rifle Association.

Leo’s unseen hand is everywhere. He is the central cog through which much of the dark money funding goes. As the Washington Post noted last year, “Leonard Leo helped conservative nonprofits raise $250 million from mostly undisclosed donors in recent years to promote conservative judges and causes.”

This is why earlier this month, Democratic Senator Sheldon Whitehouse of Rhode Island gave a 30-minute presentation on how these dark money groups, including the JCN and Federalist Society, use dark money to shape the nation’s judiciary. Whitehouse stated that many of the financial ties influencing the judicial process led back to the Donors Trust and Donors Capital Fund.

It is here that the issue of climate change and covert judicial influence combine, because in recent years the Donors Trust has been pivotal to both. And standing in the dark shadows of the funding network once again are the Koch brothers and Mercer Family.

So Koch money and Mercer money fund groups that undermine American judiciary and undermine action on climate change. As Whitehouse said at the confirmation hearing for Barrett last week, “when you find hypocrisy in the daylight, look for power in the shadows.”

This unaccountable power continues to shape the future for generations of Americans. It is time to shine a torch into the darkness and stop the flow of dark money, once and for all.

WATCH: ‘When you find hypocrisy in the daylight, look for power in the shadows,’ Democratic Senator Sheldon Whitehouse said at the confirmation hearing for Amy Coney Barrett as he detailed what he called a GOP ‘scheme’ to deploy dark money to appoint conservative judges pic.twitter.com/6imDQUB5si