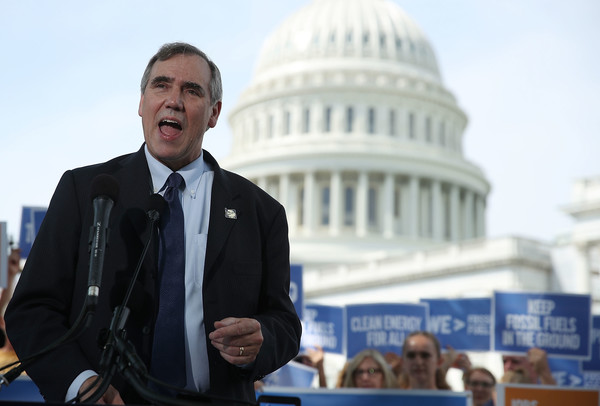 WASHINGTON, DC — Oregon’s U.S. Senator Jeff Merkley today introduced a pair of bills to protect the long-term health and well-being of the American people and their economy from the catastrophic effects of climate chaos, by tackling the risky financial investments that are fanning its flames.

Companies around the world currently hold trillions of dollars of risky fossil fuel ‘assets’ — investments similar in size to the subprime home mortgage bubble that sparked the Great Recession in 2007 — that pose a looming threat to the American and global economy. Today’s introductions follow a report from the U.S. Commodity Futures Trading Commission that climate chaos could “pose systemic risks to the U.S. financial system.”

The Protecting America’s Economy from the Carbon Bubble Act of 2020 would help safeguard the economy by prohibiting financial companies from making new investments in fossil fuels—investments that are not only accelerating climate chaos, but also risk destabilizing the global economy. The Sustainable International Financial Institutions Act of 2020 would elevate that priority to the international stage by ensuring that the United States uses its voice and vote in international financial institutions to divest from fossil fuel investments. The introduction follows years of the Trump administration deepening the climate crisis by sabotaging international efforts to reduce dangerous carbon pollution.

“The world is being driven deeper into climate chaos by financial institutions, from multilateral development banks to Wall Street’s biggest lenders. Senator Merkley’s new divestment bills are exactly the sort of real climate leadership we need from our elected officials and regulators. If banks won’t stop funding climate devastation, our government must force their hand, and Senator Merkley’s bills would force the action we need,” said David Turnbull, Strategic Communications Director with Oil Change International.

“Financial institutions have been fueling the climate crisis and environmental injustices throughout Black, Brown, and Indigenous communities across the world by financing and investing in the extractive fossil fuel industry. Senator Merkley’s bills are critical steps towards dismantling this destructive industry. We need lawmakers to do much more to hold financial institutions and the fossil fuel industry accountable for decades of environmental racism that has poisoned the air, water, and land in in frontline communities of color in the U.S. and abroad,” said Erika Thi Patterson, Deputy Campaign Director, Action Center on Race and the Economy.

“Investments from major financial institutions are driving the climate crisis and environmental injustice worldwide. In order to tackle this crisis, we need to put a stop to business as usual and reinvest in a clean energy economy that works for all of us. We applaud Senator Merkley for his leadership in working to cut off the flow of money to dirty and destructive fossil fuels,” said Kelly Martin, Director of the Sierra Club’s Beyond Dirty Fuels campaign.

“Sen. Merkley is showing real leadership by introducing the first-ever bills to cut the money pipeline fueling the climate crisis. Congress should move quickly to pass this legislation, along with a broader package of policies that will advance racial justice and create millions of jobs while staving off climate catastrophe,” said David Arkush, Director of Public Citizen’s Climate Program.

“It is insane that financial institutions should be funding projects that will substantially compromise life as we know and rely on it across the planet,” said Dr. Alan Journet, Southern Oregon Climate Action Now co-facilitator.

“At long last, legislation to prohibit banks and international financial institutions from continuing to fund fossil fuels, and thus global catastrophes. For the public interest, or at least for their own grandchildren, may others join with Senator Merkley’s courageous leadership to stop the money pipeline,” said Cheryl Barnds, Rapid Shift Network co-chair.

“Public and private banks are squandering over $4 trillion annually subsidizing the destabilization of our global climate by the fossil fuel industry. Finally, in Senator Merkley, we have a climate champion willing to stand up to this madness and call for banks to invest in a liveable future,” said Daphne Wysham, Climate Justice Fellow at the Center for Sustainable Economy.

“Ending financing for fossil fuels should be a no brainer. As this year has made abundantly clear, fossil fuels are not just terrible for people and the planet, they are terrible investments, too. Senator Merkley’s bills would finally require financial institutions to do what they should have long since done on their own: stop bankrolling climate catastrophe,” said Nikki Reisch, Director of the Climate and Energy Program at the Center for International Environmental Law.

“It’s a moral imperative that banks and financial institutions stop the flood of fossil fuel finance which supports an industry that is devastating for people and planet alike. As a matter of compassion, love and justice, religious communities are demanding that the government shut down access to finance for fossil fuel infrastructure,” said Reverend Fletcher Harper, Executive Director of GreenFaith.

“We applaud Senator Merkley for sending this clear signal that the financial backing of fossil fuel expansion must stop. Those who continue to pour money into these industries are complicit in worsening the climate crisis,” said Zorka Milin, Senior Advisor at Global Witness.

“Fighting the climate crisis and saving big money at the same time — a few more laws like this and people may start liking Congress!” said Bill McKibben, 350.org co-founder.

“When there’s an out of control fire, the worst thing you can do is pour more gas on it. Yet that’s exactly what banks and global financial institutions are doing with the climate crisis by pouring billions into dangerous fossil fuel companies and toxic projects. It’s time Congress step up and stop our banks and government from financing the climate crisis at the expense of our communities,” said Natalie Mebane, 350.org U.S. Policy Director.

“Thank you Senator Merkley for your continuing leadership in curbing the abuses of an industry that seems hell-bent on making investments that will destroy our climate, our way of life, and ultimately its own bottom line. These bills are the alarm bell that the financial markets so desperately need indicating that the time has come to transition from destructive, unsustainable fossil fuels toward a new green economy,” said Dorian Fulvio of 350NYC.

“By pouring billions into the dying fossil fuel industry, financial institutions are driving the destruction of the climate, deforestation, and furthering harms to public health and communities. Congress must listen to their constituents who are calling for policies that invest in people and the planet. We can course correct now and look towards a regenerative, renewable energy future with a transition that centers economic and climate justice,” said Osprey Orielle Lake, Executive Director of the Women’s Earth and Climate Action Network.

“Senator Merkley’s bill is important and necessary. As the pace of climate change quickens, time is running out to protect the health and safety of our children and our communities. The same banks that serve our families have been fueling the fossil fuel industry, its suppliers, and their subsidiaries with direct loans, lines of credit, and bond issues. The layers of ownership of the extraction and distribution systems make tracking the money very challenging. But, there can be no doubt that the United States banks are the world’s largest funders of the fossil fuel industry which, in turn, threatens the well-being of our neighborhoods. Therefore, Senator Merkley’s bill to disengage our banking system from this industry and its risks is a step in the right direction,” said by Sue Stafford and Toby Woll, Mothers Out Front Corporate Responsibility Team.

“Students across the country have been leading the charge for universities to divest from fossil fuels, and dozens have taken that important step to align their investments with their values, and bet on a livable future instead of climate chaos. We’re delighted to see Senator Merkley work to get Congress to push for banks and international institutions to follow suit,” said Craig Altemose of Divest Ed.

“Whether it is Wall Street behemoths or public institutions like the Export-Import Bank, financial institutions are lending the climate over a cliff. Senator Merkley’s fossil fuel divestment bills are exactly the sort of legislation we need to rein in banks accelerating the climate crisis,” said Lukas Ross, Friends of the Earth U.S.

“We are so proud of Senator Merkley who has worked tirelessly to keep Wall Street accountable for its role in the climate crisis and ensure that environmental justice is a key component of how a financial institution considers its role in the fight to save the planet and our vulnerable communities,” said Mary Cerulli, co-founder of Climate Finance Action.

“While the planet burns, many banks have piled on the financing fuel: in fact, banks’ funding of the fossil fuel industry has increased every year since the Paris Agreement. And US banks are among the worst. In the urgent, necessary effort to put out the fire and save our planet, Senator Merkley’s bills are crucial, and show us a path toward a sustainable, more just future,” said Michelle Deatrick, Chair of the DNC Environment and Climate Crisis Council.

“Thank you Senator Merkley, this is exactly the type of bill — and exactly the type of visionary leadership — we need to begin to address the climate emergency. There can be no more business as usual when it comes to fossil fuel investment,” said Alan Minsky, Executive Director of Progressive Democrats of America.