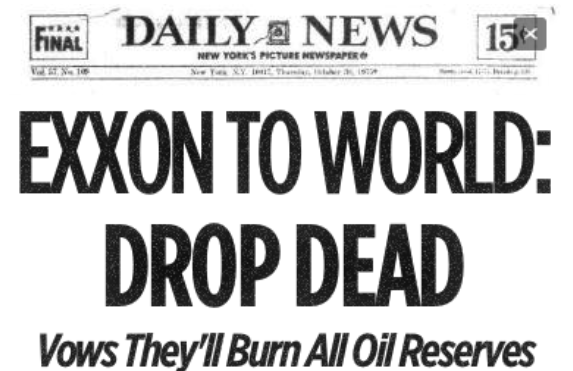 For decades now, if you had to pick one oil company that had led the pack of climate denialists it would be Exxon.

For years, avid researchers have tracked the company’s dirty climate denial spin machine, funnelled through think tanks and neo-liberal groups, which gave cover for it to carry on drilling whilst sowing doubt and confusion over climate.

Exxon’s public relations denial effort even spawned a whole counter website, Exxon Secrets, which tracked the secretive and nefarious funding. It revealed that from 1998 to 2014, Exxon spent a whopping $30,925,235 on funding climate denial groups.

In 2012, Oil Change International (OCI) worked with other progressive groups on a series of satirical adverts, entitled “Exxon Hates your children,” in part to reveal the company’s denial machine and in part to target the more than $10 billion per year US taxpayers spent to subsidize companies like Exxon.

As OCI said at the time, Exxon “must hate your children because their business model depends on drilling for more and more of the fuels that cause climate disruption, even though fossil fuel companies have already discovered significantly more oil, gas and coal than scientists say we can safely burn.”

It continued: “Exxon must hate your children because, for years, they spent millions funding a coordinated campaign to create confusion about climate science, which has slowed the move towards a more sustainable future.”

Exxon’s response was not to act on climate, but try and shut its critics up.

Two years later, OCI ran another spoof ad, saying that “Exxon to World: Drop Dead”, as the company indicated it would just carry on drilling and drilling.

Much has happened in the years since. The following year, in 2015, the New York Times reported that “The New York attorney general has begun an investigation of Exxon Mobil to determine whether the company lied to the public about the risks of climate change or to investors about how such risks might hurt the oil business.”

It was reporting on the scandal that became known as #Exxonknew, the company has known for decades about climate change but has misled the public and its shareholders ever since.

The investigations into Exxon’s activities kept on coming, and all the while Exxon kept on drilling. In 2016, the LA Times reported that “California Attorney General Kamala D. Harris is investigating whether Exxon Mobil Corp. repeatedly lied to the public and its shareholders about the risk to its business from climate change — and whether such actions could amount to securities fraud and violations of environmental laws.”

A year ago, last October, the New York case finally made it to the courts. On the eve of the trial, a team of academics published further evidence of the fossil fuel industry’s decades-long denial-and-delay disinformation campaign on climate change, including how companies like Exxon had “arranged and funded denial and disinformation to suppress action and protect its status quo business operations.”

A year on and the world has changed beyond recognition due to the COVID pandemic. A year on our climate emergency is becoming more evident and urgent day by day.

Big Oil is in deep trouble, with crashing oil demand and tumbling oil prices. The oil majors have been shedding cash and jobs and reputation. Last month, I blogged how “the once mighty Exxon suffered the corporate humiliation of being booted out the highly influential Dow Jones Industrial Index.”

I quoted Bloomberg stating that “The removal of Exxon Mobil Corp. from the index after an uninterrupted presence since 1928 shouldn’t come as a surprise. It’s not the end of Big Oil, but it may signal the start of the beginning of the end.”

Later last month, OCI, in collaboration with 30 other organisations, released a new assessment of the latest climate pledges from Exxon as well as other oil companies. In the briefing, called Big Oil Reality Check, we focussed on how these companies’ plans stack up against the bare minimum of what’s needed to limit global warming to 1.5 degrees Celsius °C.

And we concluded that amongst Big Oil, Exxon and Chevron really are the worst offenders. On every criteria we used to evaluate Exxon’s climate plans, the company’s policies were deemed “grossly insufficient”.

Exxon simply does not care about climate change. Even in its slow death spiral, Exxon wants to carry on drilling. And every day our climate emergency gets worse. Due to climate change, new research, published in the journal Nature Communications, shows that the Amazon could be reaching a “tipping point” where as much as 40% of the existing rainforest is lost forever, a savannah instead of as rainforest.

For those hoping that the duel whammy of the pandemic and our climate emergency would belatedly and finally pivot Exxon away from fossil fuels, this is not going to happen. The company just wants to carry on drilling.

Yesterday Bloomberg reported that Exxon was “planning to increase annual carbon-dioxide emissions by as much as the output of the entire nation of Greece,” which would set “one of the largest corporate emitters against international efforts to slow the pace of warming.”

An analysis of company documents by Bloomberg reveals that, if the company sticks to its corporate business as usual plan, “Exxon would add to the atmosphere the annual emissions of a small, developed nation, or 26 coal-fired power plants.”

“The news that Exxon expects to continue ignoring the devastating impacts of our climate crisis and increase their emissions for years to come is both appalling and unsurprising,” David Turnbull, the strategic communications director here at Oil Change told Earther’s Dharna Noor.

“[The] revelations show that Exxon remains intent upon drilling our climate to catastrophe; any lip service they give to climate action is simply public relations spin to try to avoid any real responsibility,” Turnbull said.

The trouble is, as we said years ago, the message from Exxon is as it was then. Despite the climate emergency it has not changed. It remains: “Exxon to World: Drop Dead”.