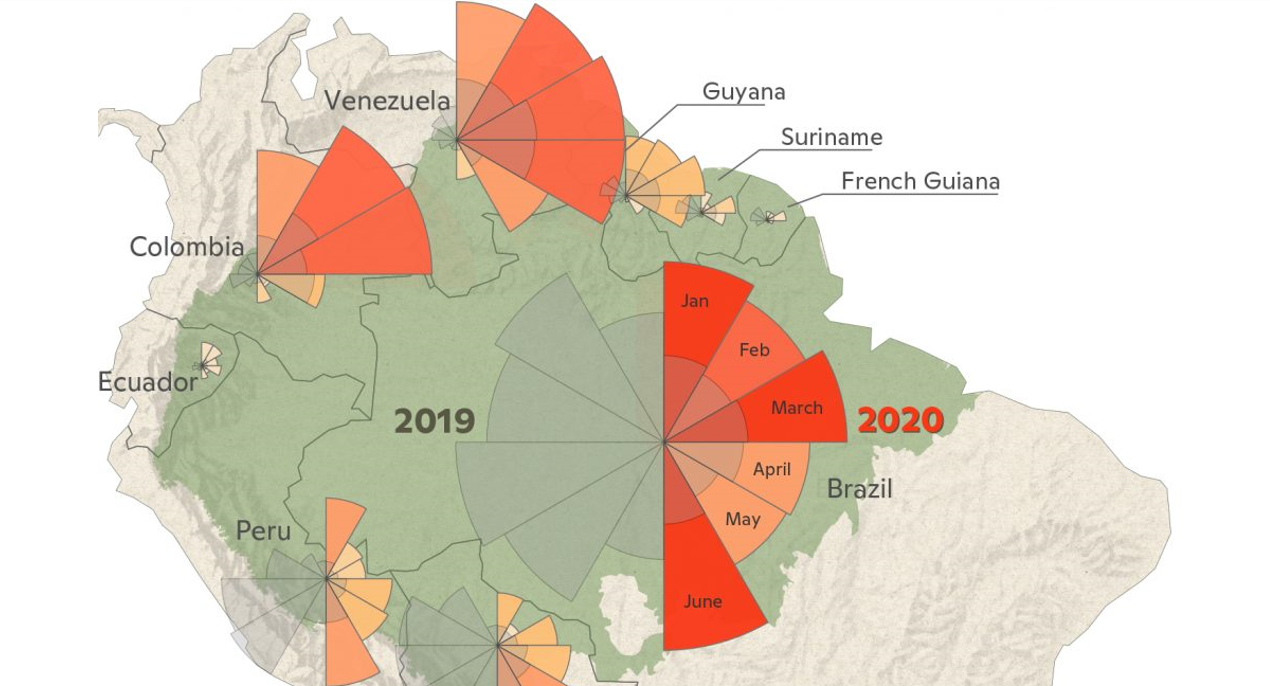 Breaking news this week from climate scientists is that we have just completed the hottest 12-month period in recorded history.

Heat has consequences, as we know with months of record temperatures in the Arctic, leading to unprecedented wildfires and warming. It also has consequences in the Amazon, another region vulnerable to climate change.

Newly released data from the leading scientific experts in the region, the Woods Hole Research Center and IPAM Amazonia, suggests that there are reasons to be concerned as we approach the traditional fire season.

Heading into the July 2020 fire season, almost all Brazilian Amazon states have had more fires during the first six months of 2020 than the same period in 2019. Science by WHRC and @IPAM_Amazonia. Model by @g_fiske. Read more in our newly released outlook: https://t.co/EOO7b4IPuW pic.twitter.com/7LsyWDLn8e

As the experts said: “almost all Brazilian Amazon states have had more fires during the first six months of 2020 than the same period in 2019.” Last month, there were 2,258 fire outbreaks detected across the Amazon — the highest number in 13 years.

Deforestation has also continued too, with over 3,300 km2 of forest destroyed so far this year.

It is also shaping to be a bad year for CO2 emissions in the Amazon. “CO2 emissions committed to the atmosphere as a result of forest clearing and ongoing burning is expected to be roughly 20% higher than the same period in 2019, having increased from approximately 94 million metric tons (MMT) CO2 in 2019 to over 115 MMT CO2 in 2020,” noted Woods Hole and IPAM Amazonia.

The fire situation could be made worse by the current COVID-19 pandemic, and the disastrous policies of Brazilian President, Bolsonaro, who has dismantled environmental protections in the region since taking office. Over the last two years, deforestation of the Amazon has increased 34%, with deforestation of Indigenous lands up a staggering 80%.

Brazil is already one of the worst affected countries for COVID-19. A recent report in the British Daily Telegraph warned that “a surge in incidents of respiratory problems triggered by thick clouds of ash and smoke may soon overwhelm hospitals in northwestern states, many of which are already struggling with the coronavirus pandemic.”

Many Indigenous communities made vulnerable in the Amazon face serious risks from contracting COVID-19.

An article on the Conversation website last week noted that “Data shows that Black Brazilians and Indigenous people are getting sick and dying at much higher rates.” The article quoted a recent report from Brazil’s Indigenous Environmental Institute, which concluded that “if current trends continue, 5,600 Yanomami — or 40% of their entire population — could become infected with COVID-19.”

So there are reasons to be deeply, deeply concerned. However, there may also be reasons to be extremely, cautiously, optimistic. Some thirty international investors from the USA, UK, Japan, the Netherlands, France, Brazil, Norway, Sweden, and Denmark, controlling an estimated USD 4.6 trillion have been pressuring the Brazilian Government to do more to prevent forest fires.

And under intense pressure from the investors, last week, the Brazilian government announced it would introduce a four-month fire ban in the Amazon.

Vemund Olsen, a senior advisor from the Rainforest Foundation in Norway, said, “this is potentially great news, and an important step to prevent a repeat of last year’s catastrophic forest fires, but it remains to be seen whether it will be enforced.”

The decree banning fires is set to be issued this week. But whether anything changes on the ground remains to be seen.

Meanwhile, civil society groups will be watching and demanding action from Bolsonaro’s government. Anna Jones, Head of Forests at Greenpeace, told the Telegraph, “over the next few months, unless we see strong intervention, fires will be likely to increase and engulf vast areas of forest, endangering the lives of Indigenous Peoples, wildlife and worsening the climate crisis globally.”