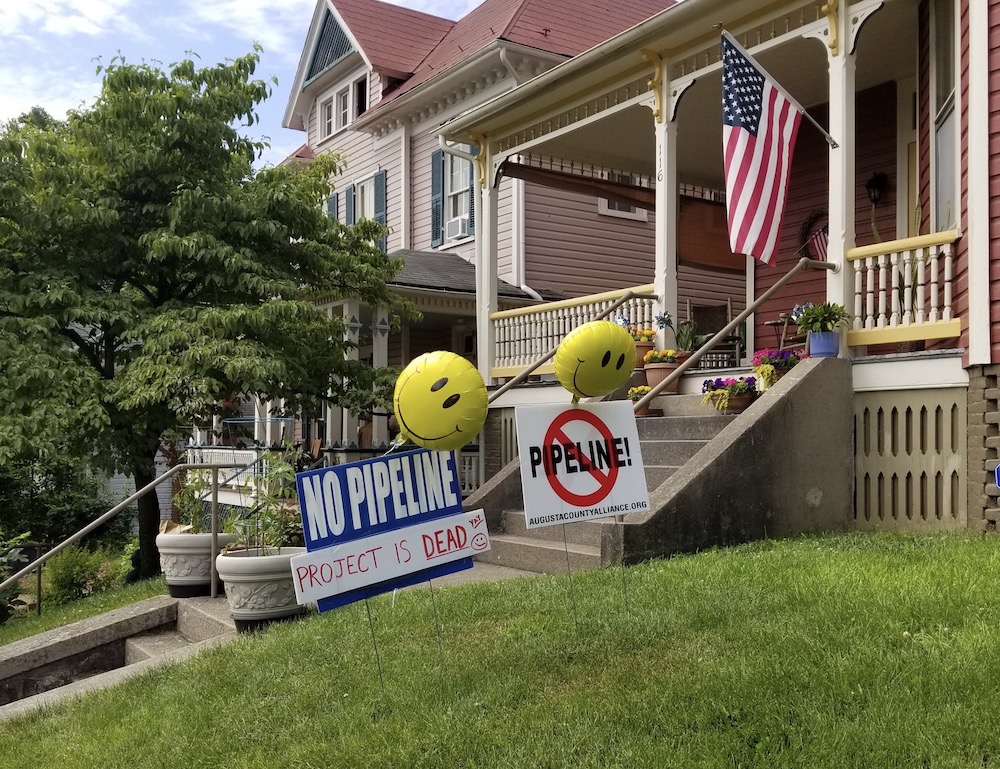 Sunday’s announcement of the cancellation of the Atlantic Coast Pipeline (ACP) was remarkable for so many reasons. Not least that the two companies, Dominion and Duke, are the most powerful corporate entities in their respective states (Virginia and North Carolina). For these two corporate giants to back down is a rare and beautiful thing to behold.

This victory comes as an enormous relief to people all along the more than 600 miles of pipeline route through West Virginia, Virginia, and North Carolina. Farmers, homeowners, small business entrepreneurs — the pipeline fighters who won this rich victory were everyday people whose lives were upended for the past six years just because Dominion and Duke came up with a nifty scheme to enrich their shareholders with guaranteed ratepayer money. Or so they’d hoped.

There is little doubt that movements for environmental and climate justice in the U.S. and Canada are turning the tide on a reckless and arrogant industry that has run roughshod over all else for too long. But public statements from the companies involved, as well as from U.S. Secretary of Energy Dan Brouilette, mislead the public about the demise of ACP, as well as the implications for U.S. energy supply.

Let’s start with Secretary of Energy Brouillette. In a statement on the cancellation of ACP, he expressed his frustration with what he called a “well-funded, obstructionist environmental lobby.” Setting aside the fact that the environmental lobby barely constitutes a few drops in the ocean of funds available to oil and gas lobbyists, the idea that challenging incorrectly issued federal permits is “obstructionist” is typical of the Trump administration’s lack of respect for the law.

ACP failed because it couldn’t be built without violating the law. From the Fish and Wildlife Service to the National Park Service to the Army Corp of Engineers, federal agencies ignored the laws they are charged with upholding and rubber stamped a total of eight permits. But none of these could stand up to scrutiny when challenged in a court of law, and all were eventually revoked or suspended. The fact that ACP can’t be built without violating the Endangered Species Act, the Clean Water Act, or the National Environmental Protection Act should be an important and concerning lesson — something to be addressed, not overlooked. When regulators fail, as they did here, attorneys have every right to hold them to account on behalf of concerned residents. It’s a sign of our times that we have to point that out to a cabinet secretary.

Which brings us to the revisionist history of Dominion Energy CEO Thomas Farrell. Revisionist history is something he specializes in, having co-written and funded a Civil War movie called Field of Lost Shoes that was described by one reviewer as “a pinnacle of revisionist bullshit,” and by another as having, “as many examples of this sort of bullshit in the film as the screenplay has words.”

I’m not sure I have kinder terms to describe the claim in his company’s statement on ACP’s cancellation that, “(t)hese lawsuits and decisions have sought to dramatically rewrite decades of permitting and legal precedent”, and that, “(u)ntil these issues are resolved, the ability to satisfy the country’s energy needs will be significantly challenged.”

The first statement might ring truer if ‘rewrite’ were replaced with the word ‘redress.’ For decades, pipelines have been permitted with zero regard for their environmental impact. Unfortunately, the “well-funded” environmentalists have not been well-funded enough to challenge the vast majority of these projects. But the lesson from ACP is that when we fight, we win. And in this case, we won because the law is on our side. Federal agencies can get away with issuing illegal permits until those actions are brought before a court of law, which is precisely what attorneys at Southern Environmental Law Center and the Sierra Club did with ACP — and they won over and over again.

The other part of Farrell’s statement, that until pipeline companies are given free rein to coerce federal agencies into breaking the law, America’s will run short of energy, is only matched in its absurdity by his film’s depictions of compassionate Confederates.

Unfortunately, when it comes to oil and gas pipelines, the U.S. is not about to run short. According to EIA data, the decade from 2010 to 2019 has seen over 10,500 miles of gas pipelines built, adding over 123 billion cubic feet a day of capacity. This is over 40% more capacity than the country consumes. In addition, over 50,000 miles of liquids pipelines have also been laid in the period, capable of transporting over 33 million barrels per day of crude oil, petroleum products, and gas liquids.

In 2019, nearly 8.5 million barrels of oil, petroleum products, and gas liquids were exported from the U.S. every day. Gas exports hit nearly 13 billion cubic feet per day — enough to fill eight and a half ACPs.

Adding to this absurdity is the idea that more gas is the only solution to the energy needs of Virgnians and North Carolinians. Dominion ranks 50th out of 52 on the American Council for an Energy-Efficient Economy’s 2020 Utility Energy Efficiency Scorecard, while Duke NC is 26th. But it has also been clear for years now that gas is losing market share to wind, solar, and battery storage. Indeed, it was shown over and over again that ACP had no clear market rationale. While the company statement cancelling the project blamed legal obstacles and related rising costs, the real issue was more likely legislation passed in the Virginia General Assembly last February that mandates a fossil fuel phase out and makes it harder for Dominion to simply pass the cost of the pipeline through to ratepayers, guaranteeing a healthy rate of return without taking on additional risk.

As someone who lives close to the (former!) proposed ACP route in westen Virginia, and who was somewhat involved in the fight against the project for the past six years, I saw firsthand how completely this poorly conceived project overtook so many lives. I also saw how determined and dedicated so many people were to stopping this project in its tracks. Those directly affected people, and their friends, family, and supporters in their communities, have spent the last six years worrying, hoping, working on legal cases, commenting on permitting dockets, organizing and attending rallies, informing their neighbors, and participating in endless conferences, conference calls, and meetings. All of this forced upon them because the regulatory agencies who should have protected them could not be relied upon, and failed them again and again. Many of their representatives, including successive governors of all three states, Republicans and Democrats alike, let them down. Federal and state agencies bent over backwards to allow construction activity they were mandated to disallow. And far from “obstructing,” these brave pipeline fighters stood up to defend the law, their land, their communities, their neighbors, and our climate — and this weekend they won a resounding victory.

So don’t let the revisionist history of Thomas Farrell and the fossil fuel cronies currently running the Department of Energy take anything away from the enormous pride that should be felt by all that have fought ACP and other pipeline projects. We are on the right side of both the law, and history.