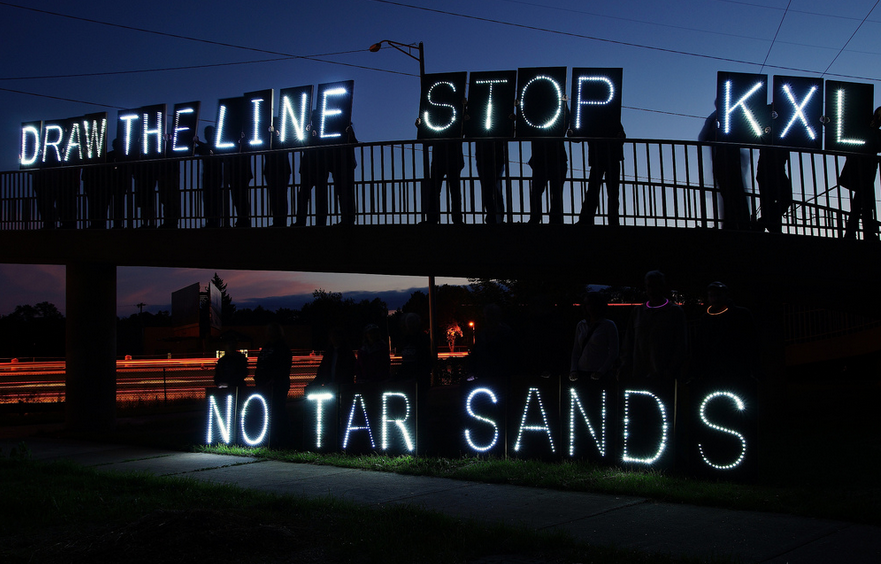 BREAKING: Leaked memo reveals Canadian oil lobby’s secret list of COVID demands
Environmental Defence obtained a leaked, 13-page memo sent by the Canadian Association of Petroleum Producers to Canada’s Minister of Natural Resources that reveals how far the industry is reaching to exploit the current health crisis for its own ends.

As Dale Marshall, National Program Manager at Environmental Defence, responded, “This is a crass attempt by oil companies to exploit a global health crisis to ram through every demand they’ve ever made, and many they never would have tried if there wasn’t a global emergency.”

OPEC+, G20 agree to cut production. What if they did so for the climate?
Last week, the OPEC+ members agreed to production cuts of around 10 million barrels per day in May and June. G20 nations also indicated they’ll consider cutting production – but without setting a particular volume of cuts. This is the biggest oil supply deal ever – but it still couldn’t pull crude oil prices above USD 30 per barrel.

In part, this is because the cratering of demand due to COVID-19 is much larger, and global oil storage capacity is almost full. From a broader view, this is because the supply deal doesn’t address “the source of the problem,” as Lorne Stockman, senior research analyst at OCI, put it. “The global oil industry in general, and the US shale industry in particular, has been oversupplying the market for much of the past decade while ignoring the urgency of the climate crisis.”

The current “unmanaged decline of oil” is a “harbinger of what’s to come if governments don’t get their acts together and design recovery plans that phase out fossil fuel production in a way that is both just and equitable,” added Hannah McKinnon, OCI Energy Transitions and Futures Director.

The world’s top oil-producing nations have shown they can join together to cut production to protect the oil industry. Now it’s time to flex the same type of cooperation to equitably manage its decline.

Shell announces net-zero aim – but no credible plan to achieve it
Shell CEO Ben van Beurden announced yesterday that the company will “aim to be a net-zero emissions energy business by 2050 or sooner.” But, like BP’s, Shell’s net-zero pledge includes major loopholes and lacks concrete details as to how the company will do that. As Richard George, head of Greenpeace UK’s climate campaign, responded, “A credible Net Zero plan from Shell would start with a commitment to stop drilling for new oil and gas.” Moreover, Shell is only pledging a 65 percent reduction in the “carbon intensity” of products it sells by 2050. Theoretically, a company can decrease carbon intensity while increasing actual, total emissions. Such a weak target suggests Shell plans to rely on massive amounts of risky negative emissions technologies to achieve “net zero” while continuing to extract and sell oil and gas.

Over 100 groups urge AfDB to reject funding for East Africa oil pipeline
In a letter sent last month, more than 100 civil society groups from across Africa and the globe urged the African Development Bank to deny a funding request from the governments of Tanzania and Uganda for the stalled East African Crude Oil Pipeline Project (EACOP). The groups requested a response by 10 April, but have yet to receive one.

U.S. banks plan ‘unholy marriage’ with Big Oil and Gas
Some big U.S. banks are getting ready to go directly into the fossil fuel business, setting up shell companies to own and operate oil and gas fields, as they prepare to seize assets from bankrupt fossil fuel companies.

OPEN LETTER: Sign the open letter (for organizations) calling for #NoBigOilBailout in the U.S.

U.S. federal court invalidates significant Keystone XL permits
On Wednesday, a U.S federal court judge ruled that the U.S. Army Corps of Engineers broke the law when it approved Nationwide Permit 12, a key water crossing permit for TC Energy’s Keystone XL tar sands pipeline and many other pipelines nationwide. This major ruling prevents construction through hundreds of water crossings along the Keystone XL pipeline route, and prohibits the agency from using this fast-tracked approval process for any pipelines nationwide.

However, TC Energy has said it plans to proceed with pipeline construction elsewhere, even during the COVID-19 pandemic.

Total’s shareholders file climate resolution
A group of 11 shareholders of oil and gas group Total, representing 13.5% of their capital, have filed a resolution to the Board of Directors ahead of Total’s annual general meeting (AGM). If approved by the Board and then passed by the AGM, the resolution will require Total to “articulate a roadmap to align its activities with the provisions set forth in the Paris Agreement,” and to set targets for reducing emissions from all stages of its business (fuels produced, transformed, and sold).

Pandemic Crisis, Systemic Decline: Why oil, gas and plastic are a sinkhole for recovery funds
A new report from the Center for International Environmental Law makes the case that the oil, gas, and petrochemical industries showed clear signs of systemic weakness before the COVID-19 crisis. Government officials should not waste limited response and recovery resources on bailouts, debt relief, or similar supports for companies already in long-term decline.

The Big Oil Money Pit: How U.S. stimulus could prop up failing polluters
New analysis from Friends of the Earth U.S. exposes how oil majors and fracking companies are positioned to benefit from USD 750 billion in corporate debt-buying announced by the U.S. Federal Reserve, funding made available through U.S. stimulus legislation.

The Case for U.S. Public Ownership of the Fossil Fuel Industry
A new discussion paper from Oil Change International and The Next System Project examines the potential benefits of the U.S. government taking long-term ownership and control of the fossil fuel industry. Instead of bailouts for executives, this approach could guarantee near- and long-term economic security for struggling workers and communities, and the wind down of fossil fuel production to meet climate goals.

Does the intervention create or amplify a lock-in of carbon- or energy-intensive development patterns, or represent a future stranded asset risk due to decarbonization, technology change or other market trends?

The Climate Debt
Writing in Foreign Affairs, Mohammed Adow of Power Shift Africa describes his lived experience of the climate crisis in Kenya, and builds a compelling argument that rich countries, which have built their wealth in fossil fuel intense ways, owe people and countries in the Global South a profound “climate debt,” even as funding pledged at the UNFCCC and elsewhere has not fully materialised.

This provides a useful context for the profoundly unequal ways that the current oil market crash and COVID-19 crisis are unfolding worldwide.

Think This Pandemic Is Bad? We Have Another Crisis Coming
Rhiana Gunn-Wright of the Roosevelt Institute lays out a powerful comparison between the U.S. policy responses to the COVID-19 crisis and the climate crisis, unpicking the social, racial, and class injustices in each:

Refusing to include measures related to climate and environmental justice in economic stimulus packages related to the coronavirus is not neutral when there is no guarantee of other opportunities to do so later. We need to design the stimulus not only to help the U.S. economy recover but to also become more resilient to the climate crisis, the next multi trillion-dollar crisis headed our way.

Central banks must target a green recovery after coronavirus
Nick Bryer of 350.org argues that central banks must ensure that the huge finance injections coming in response to the current crisis help to create a more stable and sustainable world. The 2008 bailout and stimulus packages reinforced existing inequities and instabilities, and even now Big Oil and Gas are lobbying for funding. Instead, he argues, we must seize this chance to build back better – so the response to one crisis does not fuel another.

The IEA must upgrade its climate toolbox, not revert to business as usual
OCI Senior Research Analyst Kelly Trout presents a detailed analysis of the ways that the IEA must fix its climate toolbox to be fit to advise governments on a clean energy transition. First and foremost, the IEA needs to align its short-term policy advice with a long-term energy scenario equipped to limit warming to 1.5°C. That is, after all, the goal that IEA member governments agreed to pursue under the Paris Agreement.

Meanwhile, the IEA has this week released its April 2020 Oil Market Report, which claims that the oil industry “will remain central to the functioning of the global economy.” OCI’s Kelly Trout responded:

After pushing a welcome green stimulus message, the IEA seems to have forgotten the climate crisis is worsening in its message around the latest oil market report. What we’re seeing now is a chaotic, unmanaged decline in oil markets that is harming workers and vulnerable economies at the worst possible moment. But it’s workers and developing countries’ budgets that need rescue, not oil executives and their inherently volatile and unsustainable business model.