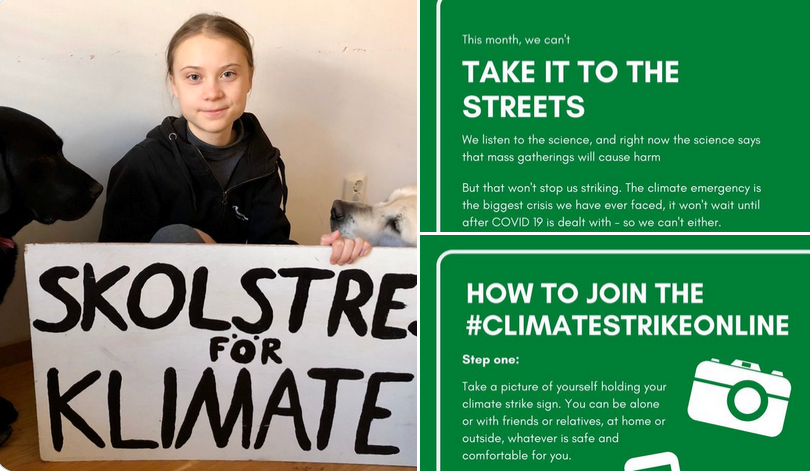 As the Coronavirus sweeps the globe, as they do over climate change, young activists are listening to the science.

Instead of taking to the streets today for the 82nd SchoolStrike on a Friday, youth leaders, like Greta Thunberg have urged school strikers to avoid large crowds and protest digitally instead.

Using hashtags such as #DigitalStrike and #ClimateStrikeOnline, the youth have taken protesting online.

We can’t solve a crisis without treating it as a crisis and we must unite behind experts and science.
This of course goes for all crises.

Now the experts urge us to avoid big public gatherings for a better chance to #flattenthecurve and slow the spreading of the Coronavirus. 1/4 pic.twitter.com/24o3a7J9ed

“We’ll have to find new ways to create public awareness & advocate for change that don’t involve too big crowds,” Thunberg wrote. “Keep your numbers low but your spirits high and let’s take one week at the time.”

Others are finding different ways to protest too. Some 30 young South Koreans are suing their Government, claiming that their parliament’s “recent revision to the nation’s climate-change law doesn’t go far enough to protect their future,” according to Time Magazine.

According to Time, the students’ complaint to the Constitutional Court in the capital Seoul argues that their fundamental rights, including the right to live and a clean environment, have been infringed by South Korea’s climate-change law, “which they say fails to set specific targets to prevent global temperatures from rising.”

One of those involved in the action, Kim Yujin told Time “We want drastic change. We did what we could to make changes by meeting government officials. It wasn’t enough to make the political leaders implement better policies.”

According to Time, South Korea’s Framework Act on Low Carbon, Green Growth, which was amended in December last year, pledged to reduce the country’s greenhouse gas emissions to 536 million tons by 2030.

The young plaintiffs are arguing this target is not ambitious enough to keep global warming to below 2 degrees Celsius, as outlined in the the 2015 Paris agreement.

The lawyer, Youn Sejong, who is working on the case said they believed that there were “sufficient grounds for the court to accept our complaint.” If successful “there’ll be a binding force for the lawmakers to come up with more specific targets.”

Meanwhile, South Korea is also under pressure to phase out to phase out all its dirty coal power plants at home and abroad by the end of this decade, if it is to meet the Paris goals.

Last month the research organization based in Germany, Climate Analytics, issued a report on this subject, saying: “Korea must phase out coal power by 2029 in order to do its part to limit climate change under the Paris Agreement.”

Paola Yanguas Parra, an author of the report, criticized South Korea’s funding of coal plants abroad telling Climate Home News that Seoul had invested USD $5.7 billion in 22 foreign coal projects from 2013-19. Climate Analytics called on the country to increase the implementation of renewables, such as solar and wind power, instead.