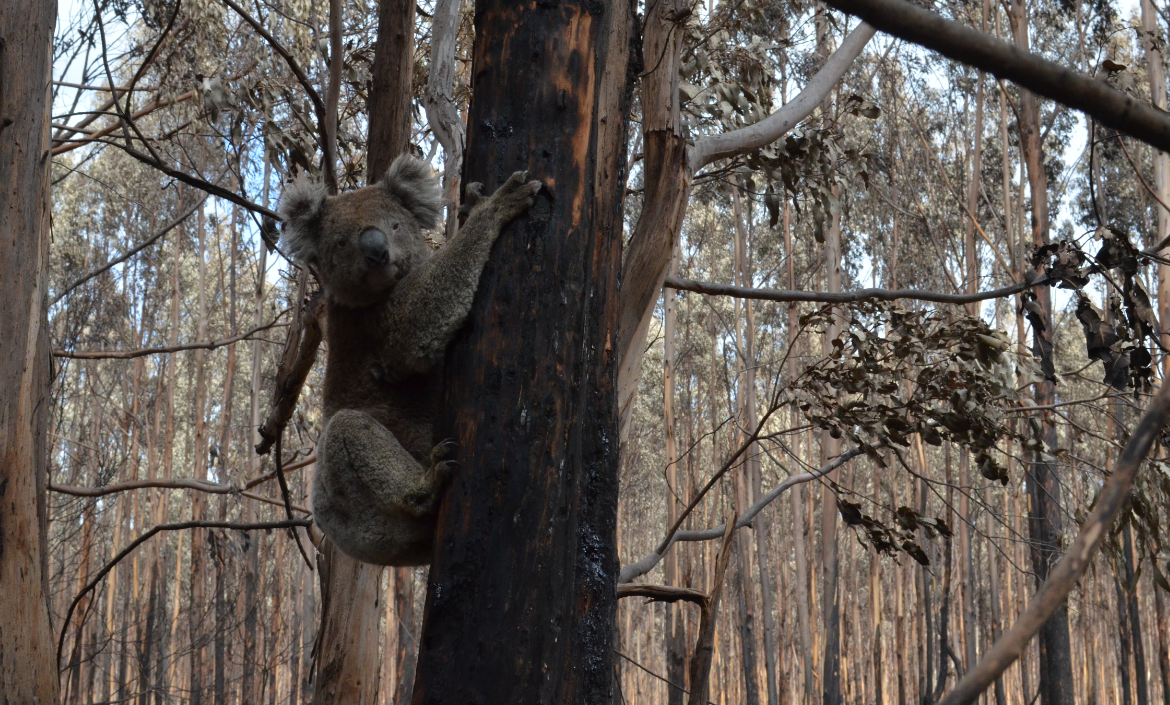 “There was once a town in America where all life seemed to live in harmony with its surroundings,” is the first line of Rachel Carson’s seminal environmental book, Silent Spring, which was first published in 1962.

Carson’s book was a warning about the excessive use of pesticides, in particular DDT. It is seen as a book that sparked the environmental movement.

In her “fable for tomorrow” she warned how an “evil spell” had taken over the town. “Everywhere was a shadow of death.”

Fast forward nearly sixty years to the fossil fuel industry’s own shadow of death that now haunts Australia as the bush-fire crisis continues. Take the fire-ravaged Kangaroo Island, where over a third of the island has burned and  there is overwhelming destruction of the island’s wildlife. It was once an island in harmony.

As Clive Hamilton, a Professor of Public Ethics at Charles Sturt University in Canberra has pointed out: “On South Australia’s Kangaroo Island, celebrated as a kind of Noah’s Ark for its abundance of biodiversity, the third of the island burnt out included most of the prime koala habitat. Around half of the resident 50,000 koalas have perished. Joeys that managed to survive the inferno buried in their mothers’ pouches are being brought in to rescue centers by the dozen.”

Wildlife charity Humane Society International is helping treat the wounded wildlife on the island. In a statement earlier today released on its website, Erica Martin, the HSI’s Australian boss, said: “The land we’re searching is utterly scorched with charred animal bodies everywhere. It is very confronting to see the extent of the loss of wildlife.”

She continued: “At one area, which was badly burned a week ago, the scenes were nothing short of apocalyptic. There we only found one living koala amongst thousands of bodies of koalas, kangaroos, wallabies and birds.”

HSI’s senior specialist in disaster response, Kelly Donithan, added: “These are some of the toughest scenes I’ve ever witnessed as an animal rescuer: the bodies of charred animals as far as the eye can see… We’ve seen kangaroos with devastating burn injuries and dehydrated koalas gasping for water.”

Michael Clarke, an ecologist at La Trobe University in Bundoora, Melbourne, describes some of the carnage in an article for the prestigious science journal, Nature: “The scale is unprecedented: such synchronous loss of vast areas of habitat. The ferocity of the fires, which can create their own weather, means the wildlife is at a loss to respond.”

He adds: “It is deathly silent when you go into a forest after a fire. Apart from the ‘undertakers’ – the carrion eaters like currawongs, ravens and shrike-thrushes – picking off the dead bodies, there’s nothing much left in the forest. It’s a chilling experience.”

As Clarke points out in Australia, thirty years ago, scientists predicted that there would be more severe fires due to climate change. We had the warnings, but the politicians did nothing. Instead of climate action, they chose climate denial.

Scott Morrison continues to promote fossil fuels to this day. Other politicians still praise coal, despite the climate carnage, death and destruction.

At our peril @SenatorWong. Our #ClimateEmergency & #AustraliaOnFire dictates we #endcoal if we want to survive. It’s that black & white for us & the pacific. Your party is failing to lead on #climate. #auspol https://t.co/NqeN0LwTvw

Morrison is now counting the cost of his denial. Indeed, beyond the destruction of the wildlife, the cost to the economy is now put at $5 billion.

$5billion blow to the economy .. and counting. The fires of climate change in Australia are just the start of the financial costs of adaptation and mitigation. If only we’d moved to aggressive CO2 reductions 10 years ago when scientists advised that urgency was required. pic.twitter.com/zBnZQzCpkJ

Commentator after commentator are saying things have to change. One in the Australian Financial Review wrote: “Given the near-existential threat facing his country’s habitat and its consequences for the economy, Morrison should use the world stage to take on the big polluters, instead of leaving the campaign to impoverished Pacific Islands and Swedish teenagers.”

And maybe things are changing. Finally.

The Veteran Australian pollster, John Utting, told the Sydney Morning Herald yesterday that the fires have been an “absolutely seminal moment. The conversation in the past has been kind of abstract, with [the case for stronger action] very much in in the hands of the virtue signalers; people felt they were being lectured. But now, everyone is breathing the proof. There is an incredible amount of evidence that the issue is beginning to bite… people are worried about a huge loss of lifestyle, and the impact on how they want to live and what they like about this country.”

If Morrison and his climate denial cronies don’t change, worse will follow. The pattern of death and destruction will continue. In the words of Clive Hamilton: “we will grieve for something harder to define: the death of the future.”

In the meantime, Hamilton adds: “These fires, like climate-change-induced disasters around the world, are upending our ways of thinking about the world.” Sixty years ago, Rachel Carson upended our thinking of DDT. Sixty years later, if any good has to come out of these fires, it is that radical change has to come. The destruction must upend the thinking of the climate deniers. They must understand we have to end fossil fuel age. Maybe the silence will haunt them enough to act.