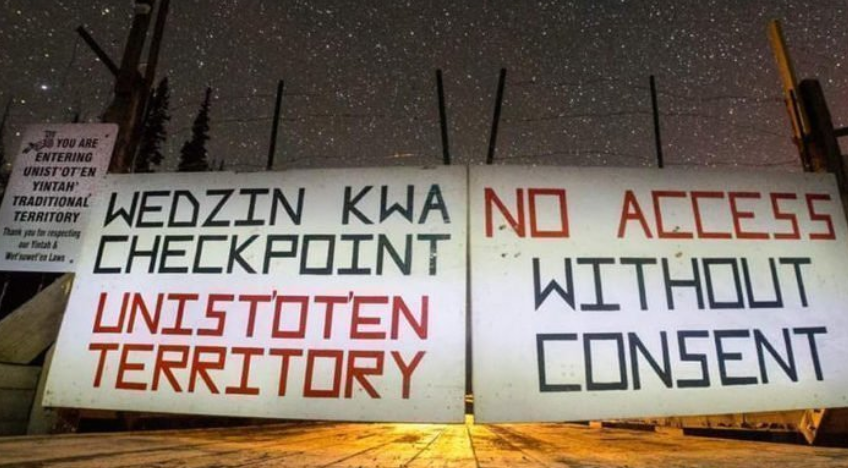 Wet’suwet’en Nation has rejected the Coastal GasLink fracked gas pipeline, stating “this is our home. Our medicines, our berries, our food, the animals, our water, our culture are all here since time immemorial. We are obligated to protect our ways of life for our babies unborn.”

Nine months after the violent police invasion onto their territories on behalf of Coastal GasLink construction, a leaked report in the Guardian showed that police had been prepared to shoot Indigenous activists and had snipers on hand.

The pipeline is planned to transport fracked natural gas from northeastern British Columbia (BC) some 670 kilometres to the coast where the LNG Canada export facility is due to be constructed.

Hundreds of solidarity events occurred since the police invasion of Wet’suwet’en territory last year, and court proceedings have been ongoing. Finally, at the end of December, the BC Supreme Court granted an injunction to allow construction of the pipeline against members of the Wet’suwet’en preventing them stopping construction work.

In response to the ruling, the Hereditary Chiefs of all five Wet’suwet’en clans rejected the Court’s decision, which they claimed criminalizes First Nations laws. They then enforced an eviction of Coastal GasLink’s workers from their territory.

The Wet’suwet’en also issued a statement calling on the state “to stop violently supporting those members of the 1% who are stealing our resources and condemning our children to a world rendered uninhabitable by climate change.”

And now the UN has weighed into the debate, calling for Coastal GasLink pipeline as well as the Trans Mountain pipeline extension and mega hydro dam Site C to be frozen until the companies and state have secured consent from the First Nations.

The UN’s Committee on the Elimination of Racial Discrimination has released a statement saying any pipeline need ‘free, prior and informed’ consent before further work is undertaken.

This is really important as the idea of “free, prior and informed consent” is embedded in the UN Declaration on the Rights of Indigenous Peoples (UNDRIP), which the BC government recently committed to through legislation in November 2019.  While the federal government and other provinces have pledged to implement similar laws, BC was the first in Canada. They said they aimed to “create a path forward that respects the human rights of Indigenous peoples while introducing better transparency and predictability in the work we do together.”

According to a report in The Narwhal, the UN committee has urged Canada to immediately cease the forced eviction of Wet’suwet’en land defenders who oppose the Coastal GasLink pipeline and Secwepemc peoples opposed to Trans Mountain.

In a two-page decision statement, the committee said it was deeply concerned by rising violence against First Nations and warned against “forced removal, disproportionate use of force, harassment and intimidation by law enforcement officials against Indigenous peoples who peacefully oppose large-scale development projects” on their traditional territories.

The UN Committee is now calling for the prohibition of lethal force against the First Nations who opposed the pipelines and for the Canadian authorities to withdraw the RCMP from traditional lands.

Grand Chief Stewart Phillip, the President of the Union of BC Indian Chiefs, told The Narwhal that the move by the UN committee is a “significant development.”

He added: “It’s somewhat frustrating and embarrassing that the UN has to chide the government of Canada and the provincial government with respect to what the rule of law is in this country in regard to Indigenous land rights, Indigenous human rights.”

Unsurprisingly, the pro-oil politicians in Alberta have taken to Twitter to attack the UN committee:

The hypocrisy has to stop.

We will not be lectured to by members of a UN panel with deplorable human rights records, particularly when the vast majority of local First Nations support these job creating projects.https://t.co/gk2UD60g5Y

With all the atrocities in the world, many committed in other oil producing countries, UN efforts would be better directed there than at Canada…

My full statement on the UN Racism Commitee calling for the halt of major resource projects: pic.twitter.com/u8jfySNDxc

Meanwhile, the Wet’suwet’en Hereditary Chiefs are now demanding that permits for the construction of the GasLink project be suspended. They have also evicted Coastal GasLink workers, RCMP and associated security and policing services from their lands, in agreement with the UN committee’s request.

In a statement they said: “There is no access to Wet’suwet’en territory without our consent. We are the title holders, and the Province must address the issue of our title if they want to gain access to our lands.”

Wet’suwet’en calls for an International Week of Solidarity have also been heard loud and clear with over 40 actions being planned right now, including Fridays for Future walkouts and occupations of company offices in Toronto. You can find an action near you and other ways to support here.