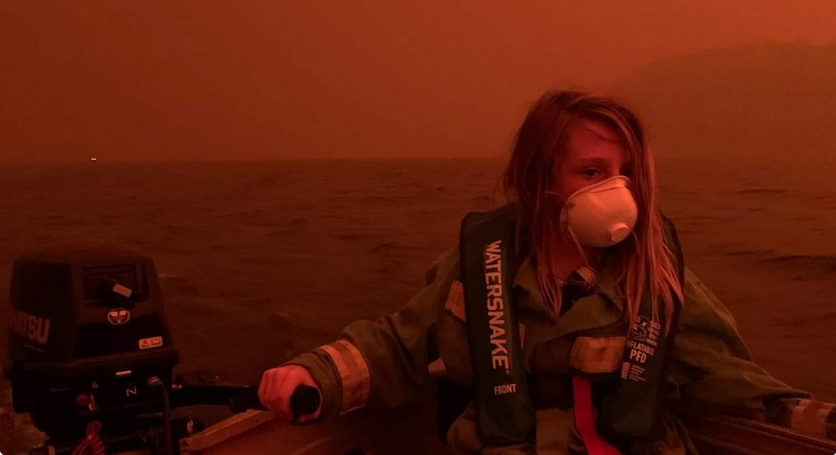 Australia is on fire in the midst of a climate emergency. The images and stories are almost too overwhelming to comprehend: dark menacing blood and orange red skies, where normally there should be bright blue sky. Even blackened darkness in the middle of the day. Pictures of dozens of destroyed houses, of devastated wildlife.

Of people sheltering on the beach to escape this apocalypse. Of people driving into lakes to survive. Of a young boy wearing a breathing mask, skippering a boat in a lake to escape the fires. The images are horrific:

My last day of the decade felt like the apocalypse. Been covering the Australian bushfires for the last 6 weeks, but haven’t seen anything like yesterdays fire that decimated the town of Conjola, NSW. #bushfirecrisis #AustralianBushfires #NSWisburning work for @nytimes pic.twitter.com/KmVKqDMKsf

Due to the fires, the sky rains deadly toxic particulates. The toxic air has become so bad in Sydney that in some buildings the city’s fire alarms have been set off. Air quality in Canberra is currently the worst in the world.

Hollywood would struggle to conjure up more horrific images if it scripted a climate Armageddon movie. Indeed, many would think they would be scare-mongering if they did. But this is today’s reality for millions of Australians.

The scale of the disaster in numbers is equally numbing. At the time of writing, seventeen people have died from the fires. Breaking news is that now one person has died from breathing toxic smoke, as well. Others will surely get sick.

The toll on wildlife is truly catastrophic. Nearly 500 million animals have been killed. Whole species may have been lost. Others will never recover. To give one example: Some 8,000 koalas – about 30% of the entire koala population of New South Wales’ mid-north coast region – have perished. Some fifteen million acres of forest have been destroyed.

At a time of national crisis, you need political leadership. But instead of leading the nation, Australian Prime Minister Scott Morrison is coming under increasing national and international condemnation for being the personification of abject political failure.

At first Morrison was on holiday in Hawaii as homes back home burnt to the ground. When he finally did return home, he remained defiant and refused to talk about climate change. In fact, he has spoken more about the game of cricket than about the climate.

Morrison is a climate denier to his core. He ignores the science and the basic simple fact that the reason his land is on fire is that it had its warmest year ever. Years of tinder dry conditions were a perfect storm waiting to ignite. And now they have.

But all of this does not matter to the climate denier.

In his New Year’s address, Morrison said: “We won’t destroy the livelihoods of Australians in the process by adopting reckless targets that force up electricity prices, now coming down under our policies, or by turning our backs on traditional industries that are especially important in regional Australia, as proposed by Labor and the Greens.”

When he did finally visit the affected communities, he called for “patience” from people who had already lost everything, including their homes.

In other sentiments, Morrison has said that Australia has faced disasters before and will do so again. What is happening is nothing new. Nothing unusual. Nothing to see here. Move on. He remains in denial.

No wonder anger is boiling over. Morrison had to cut short one visit after being confronted by angry locals. He has been derided by musicians and others.

The comment writer’s pens are – not surprisingly – sharp. Earlier today, one wrote in the Sydney Morning Herald: “You are expected to govern in the national interest, to lead on several key policy issues and, where possible, prepare our nation to deal effectively with challenges before they become crises … Morrison, your imperative for 2020 is to stop playing your ill-conceived political games and to lead. It’s do or die.”

But it appears Morrison has chosen the climate denier “die” option. As the Australian independent journalist, Michael West, writes, Australia is still firmly in the grip of the fossil fuel lobby, with a “suite of enormous fossil fuel projects destined to blow Australia’s commitments to the Paris Agreement to smithereens.”

West writes that: “In 2020, the war between climate and the fossil fuel lobby is poised to escalate dramatically as a slew of large fossil fuel projects push towards approval and production.”

He continues: “Battles will rage over each one, battles between farmers and frackers, between activists and lobbyists, between renewables and old energy interests; battles all fueled by the unfolding tragedies of this summer’s bushfires.”

He quotes local gas analyst Bruce Robertson from the respected Institute for Energy Economics & Financial Analysis, who has been monitoring a large number of proposed oil, gas and coal projects, warning that the scale of development is “unprecedented. This is the biggest tranche of fossil fuel projects I have seen in my lifetime… They are accelerating the development of fossil fuels at the moment at a pace I’ve never seen. The scale is mind-blowing.”

This is climate madness. This is nonsensical. As Australia burns, it carries on drilling, fracking, and mining. People are dying. Animals are dying in their millions. The country could face three more months of fires, before the short term crisis is over. How many more will die? And long term the climate crisis is only going to get worse.

Australia could lead the way in renewables. It could be a climate leader. Instead with Scott Morrison at the helm, with coal lodged in his heart, and oil coursing through his veins, it is a climate criminal. It has lost its way in a toxic red fog of climate denial.

It does not have to be that way. Earlier today, The Australasian Centre for Corporate Responsibility tweeted what millions already know, that the bushfire crisis means that fossil fuel expansion must end: