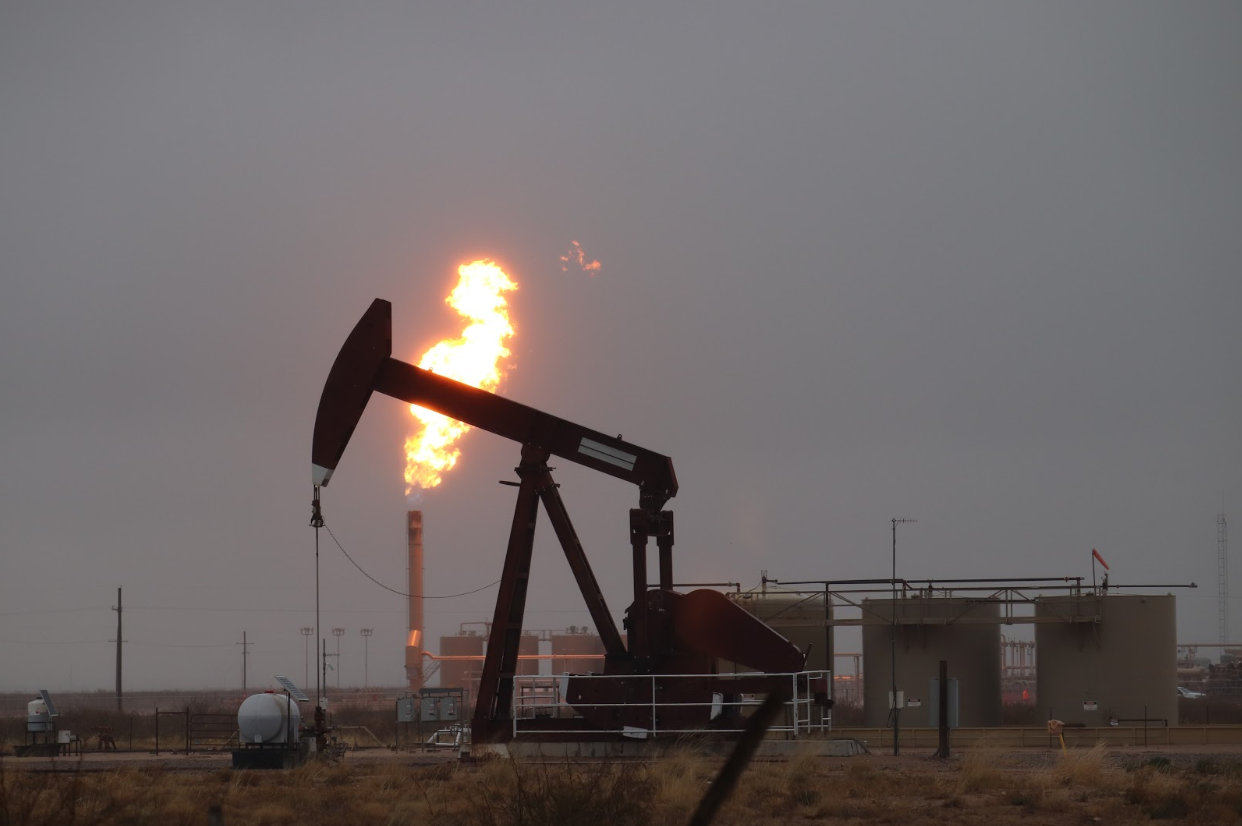 Four days in the Permian Basin, one of the world’s largest oil fields located in Southeast New Mexico and West Texas, is enough. In fact it’s more than enough. You get sick of the smell of hydrogen sulfide gas. The sight of oil wells, pumpjacks, gas processing plants, compressor stations, drilling rigs, tractor trailer trucks, frack sand mines. Pipeline corridors cut vast swathes through the countryside and continue out over the horizon as far as the eye can see. 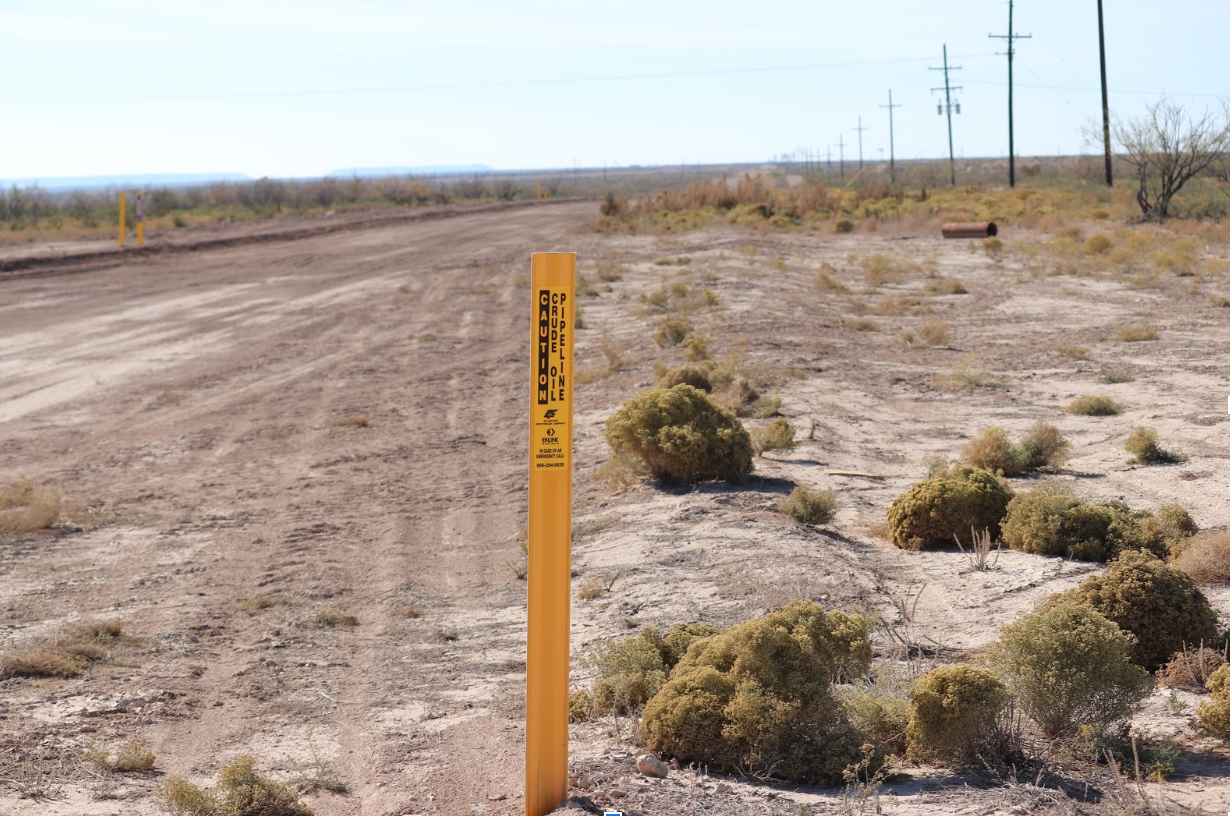 A shadow of the former beauty of the region’s landscape can occasionally be glimpsed. The vastness. The rugged shrubs and grasses that survive long periods of hot dry weather. The occasional rise to higher ground from which you suddenly see across the land for countless miles. But there is barely an acre untouched by the oil and gas industrial complex. If it’s not above ground in the form of tanks, pumpjacks, flares, processing plants, artificial ponds lined with black plastic, it’s underground in the form of pipelines, the corridors of which are cleared of all vegetation. It’s like a rash that has consumed all available space. 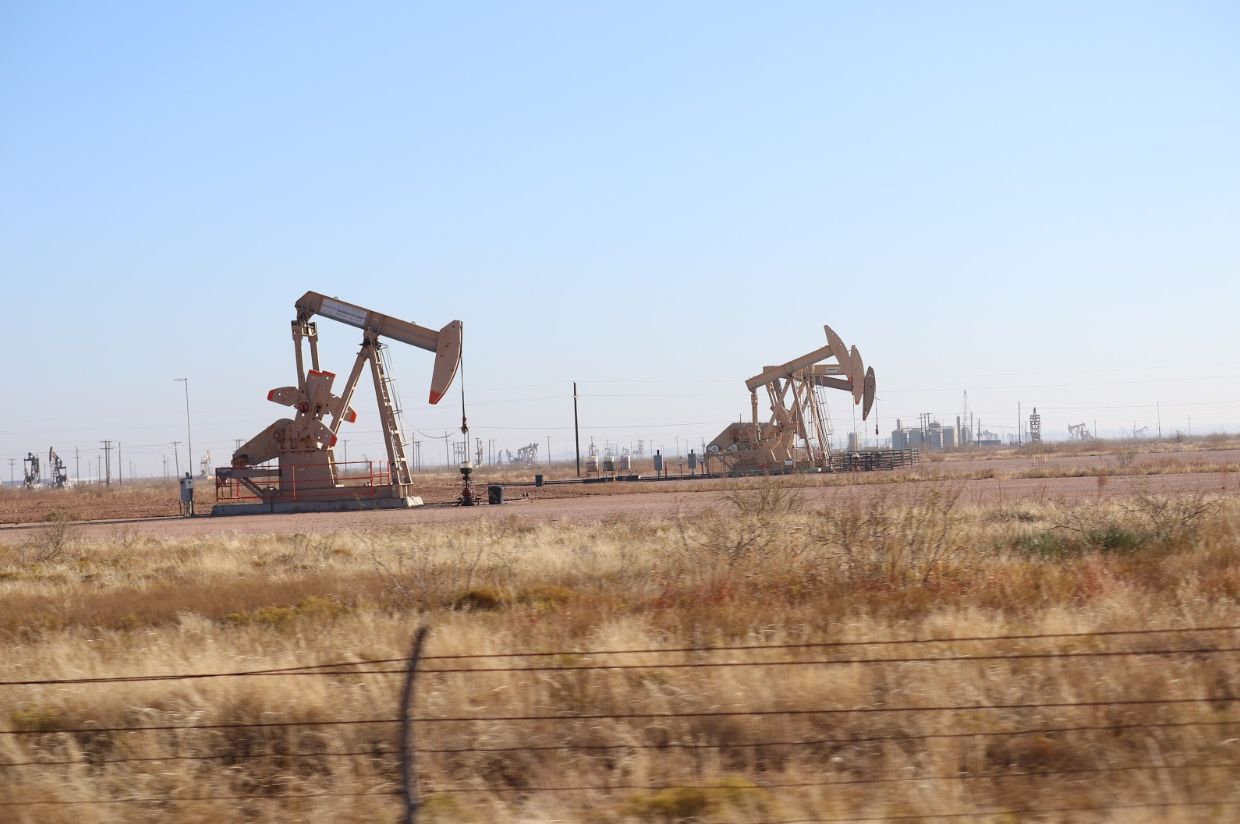 It’s even overwhelming the markets for the hydrocarbons it’s producing. For months, industry and trade news has been awash in reports of building U.S. crude oil inventories, meaning more crude is being produced than is being refined or exported. Of fossil gas prices tanking and even going negative, a clear sign of a drastic oversupply of gas. Ethane rejection hitting all-time highs. This means the fossil gas liquids supply is greater than the capacity to process it into products that we don’t need more of, primarily plastics.

These surpluses are not about a lack of infrastructure, as industry claims. An investigation by Deon Daugherty at Energy Intelligence, revealed that a lack of pipeline infrastructure was responsible for a mere 4% of flaring permits in Texas in 2018.  A few months ago, the gas pipeline company Williams protested Exco’s gas flaring permit application in the Eagle Ford shale, pointing out that it had adequate pipeline capacity in the area to carry the company’s gas to market. But Exco did not want to pay the transport cost as gas prices are so low, they may not recover the pipeline fees. The Texas Railroad Commission, which has never seen a flaring permit application it didn’t like, ruled in favor of Exco 2-1. The rare dissent of one commissioner is being seen as a possible signal of changing attitudes to flaring in Texas. But it’s clear that the problem is not about lack of infrastructure, but too much production. Something the TRC is unwilling to acknowledge.

The news is also full of shale companies continuing to report losses, to the point that even Wall Street’s easy money is drying up for producers that can’t control spending and show a profit. Apparently, over a decade of shoveling money into a hole has finally overwhelmed Wall Street’s tolerance for the shale sector’s hunger for endless growth at any cost.

But on our tour of the Permian, we saw plenty of drilling and fracking for more. We saw active drill rigs in cities, such as Odessa and Midland, the air of which hung heavy with the stench of sulfurous gas. In late October, an oil worker died checking on a pump house that was spewing hydrogen sulfide gas within the city limits of Odessa. His wife also died when she went to check on him hours later. Two of their children were waiting in the car for their mom to return. They are just the latest victims of the appalling worker safety record in America’s oil fields. Not to mention the horrendous toll on women, particularly native women, of the man camps that house workers in the booming oil country.

For much of our trip we accompanied Sharon Wilson from Earthworks, a certified thermographer, and renowned exposer of myriad violations committed daily by an industry running amok with our air, water and climate. Every day we saw the evidence at countless well sites, compressor stations and processing plants. Methane and VOCs, invisible to the eye, but clearly visible in the camera, flowing from leaky tanks, flares, compressors and equipment. 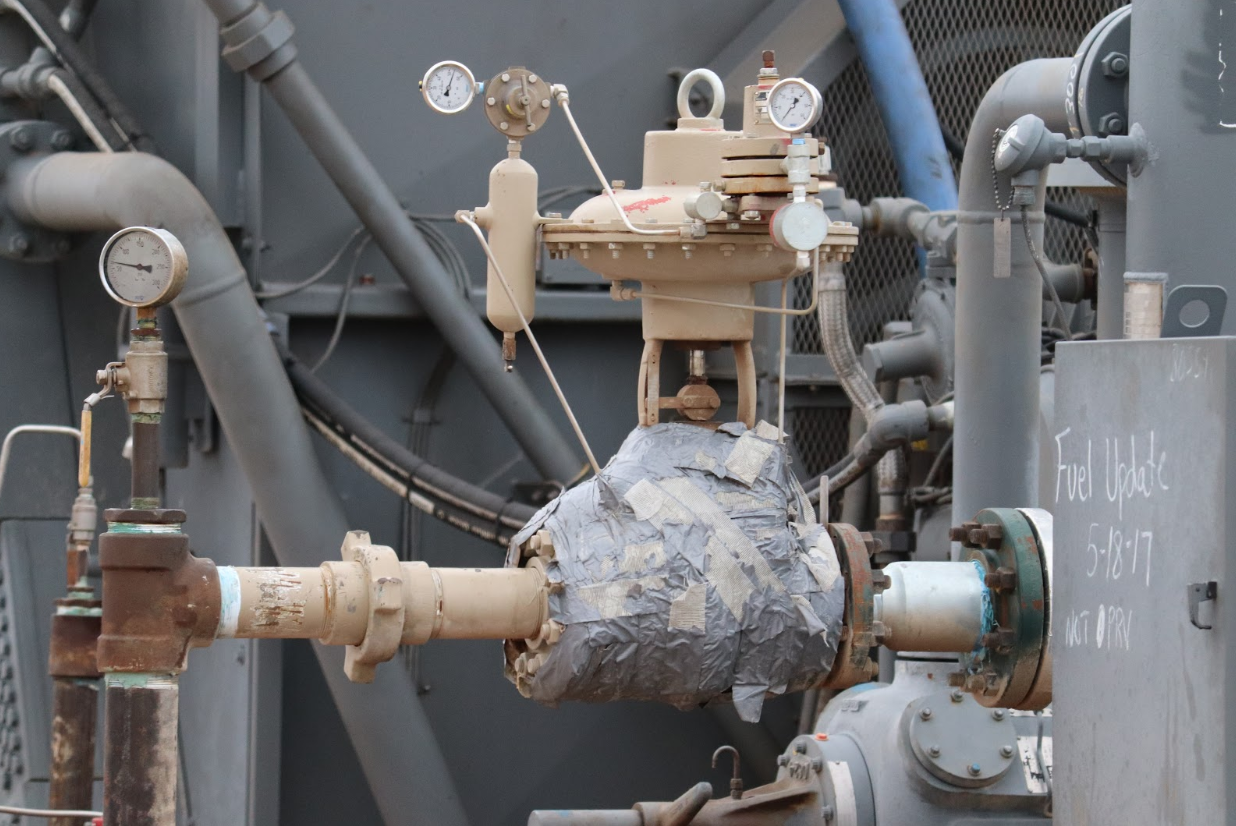 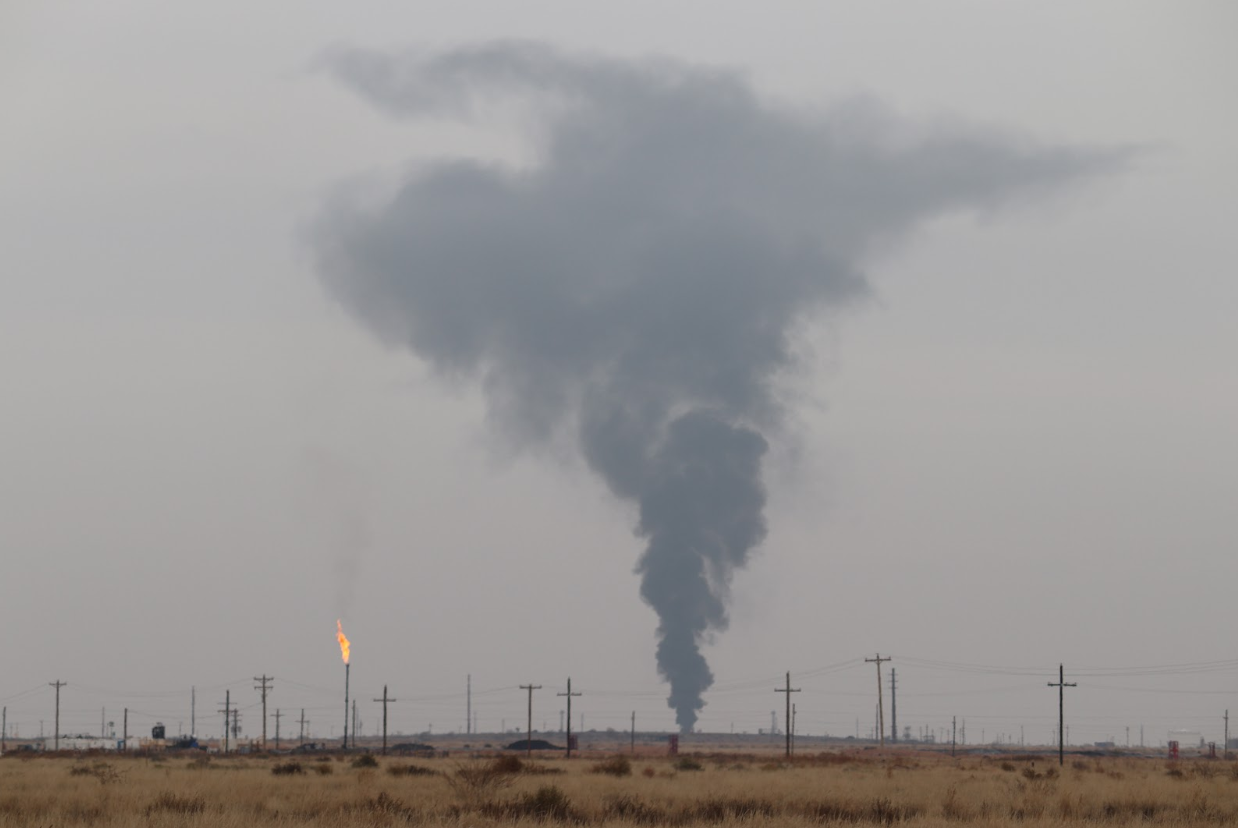 Just west of the town of Pecos, we were recording methane leaking from a compressor on a well site with the gas imaging camera. Behind us a flare started up at a gas processing plant, with thick black smoke dramatically pouring out. We thought that was bad enough, but moments later something more dramatic occurred. A much larger cloud of black smoke appeared in the distance in a column reaching high into the air. This did not look like a flare, but more like something on fire at ground level. 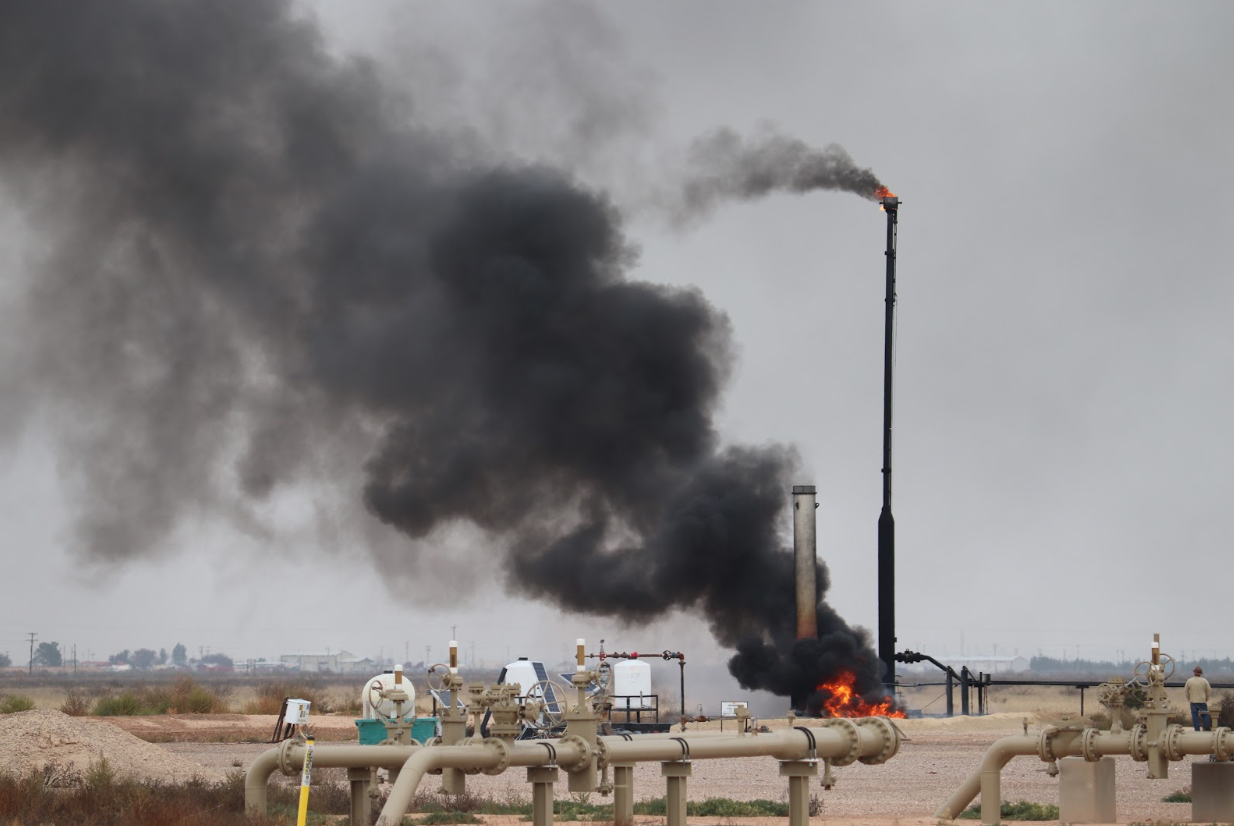 We rushed over to the area, about five miles away. As we approached, it appeared an oil well was on fire. Local police and the Pecos Volunteer Fire Department had just arrived. The fire squad eventually put the fire out by spraying high pressure water and chemicals from their truck. We plied the police for information, and found that this is a depressingly regular occurrence. 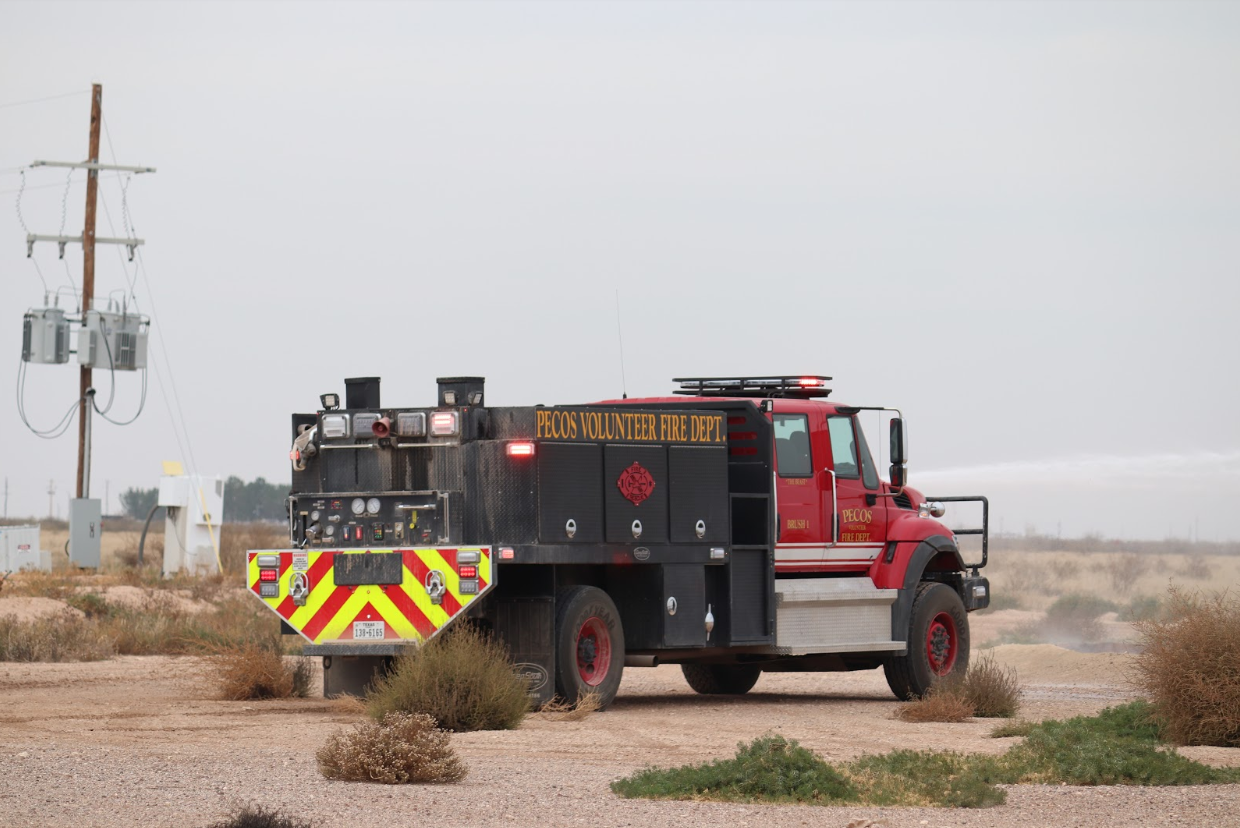 These successive occurrences of emissions violations, accidents and flare ups are all part of everyday life in the Permian Basin. We saw the same thing over and over. Sharon has seen worse on her many trips to the Permian, and across the U.S. shale plays.

While climate science says we must drastically reduce fossil fuel production, consumption and emissions, by at least 45% by 2030, Permian Basin producers are gearing up for a further doubling of production, having tripled production in the last 5 years. That may so overwhelm global markets that the fragile shale business model may collapse under its weight. But that is something we cannot rely on. The flood of petroleum and gas is keeping prices low, stimulating demand, and competing with clean energy.

We need to rise against it and turn it around, before it’s too late.