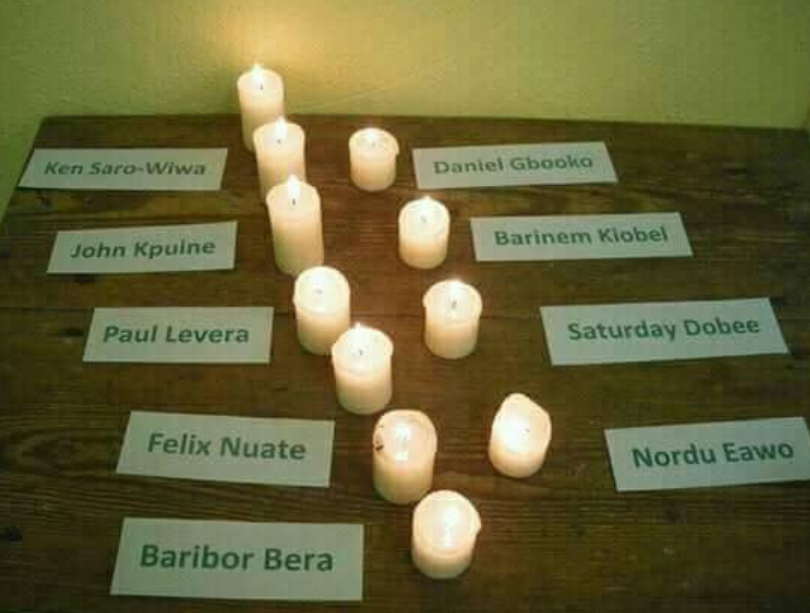 And so another Anniversary comes and goes without justice. And without closure. And with the perpetrators still walking free.

It is now 24 years since the execution of Ken Saro-Wiwa, and other Ogoni in Nigeria in 1995. The Ogoni 9, as they are called, were murdered for their campaign against the oil giant Shell, whose rampant double standards and pollution had caused the Ogoni community to mobilise.

It is appalling that no one in those intervening years has been found guilty of the extra-judicial murder of Saro-Wiwa and the others.

But Shell is an arrogant indifferent beast, whose roots are embedded in the colonial exploitation of a country like Nigeria. Its staff are insulated from the real world by a corporate internal spin machine that propagates pro-Shell propaganda that the company is some kind of green pioneering company, not a corporate polluter or killer.

Twenty four years is a long time. For nearly a quarter of a century its executives have ducked and dived as they have categorically denied any involvement in the killing of the Ogoni 9. How many times have those who seek justice witnessed the waxing or waning of the moons, the coming of the rains or the turning of the seasons? Too many to count, I’m afraid.

But hopefully justice is coming.

Saro-Wiwa wrote in his closing testimony at the trial of the Ogoni 9  that: “I and my colleagues are not the only ones on trial. Shell is here on trial and it is as well that it is represented by counsel said to be holding a watching brief. The Company has, indeed, ducked this particular trial, but its day will surely come  … The crime of the Company’s dirty wars against the Ogoni people will also be punished.”

As I recently blogged, In 2002, the widow of one of the Ogoni 9, Esther Kiobel sued Shell in the USA, where she had been granted asylum. Over ten years later, the US Supreme Court ruled that it did not have jurisdiction over the case, meaning US courts never got to examine the facts of the case, either.

Earlier this year, the District Court of The Hague heard the first arguments in Esther’s case against Shell. And last month, the court finally heard from the witnesses. Central to the case is whether Shell bribed witnesses in the trial of the Ogoni 9.

The identity of the first two of the witnesses were kept confidential but both of them told the court that they had been bribed by Shell to testify against Saro-Wiwa and others. The second witness to testify said simply: “Yes, Shell bribed me”

The court is now not expected to sit until February next year, which ironically, will be a quarter of a century after the Ogoni 9 were murdered. Hopefully, the court will rule in the plaintiffs favour, but we will have to wait and see.

As Oil Change International Executive Director, Steve Kretzmann, recently wondered, “were the executives that made the decisions to frame a peaceful activist for murder the same ones that decided to ignore their own scientists and invest in a public campaign of climate denial?”

Steve continued: “We don’t know exactly, yet, but we do know that the men that made these decisions shared a chilling disregard for life.  And that complete disregard for life continues to be on display every day as the fossil fuel industry fights to preserve its own profits, at the expense of people and the planet.”

What goes on in these men’s heads?  In part to answer that question, a colleague, Dan Gretton, who used to work for the wonderful Platform London, has written a most extraordinary book, which has taken nearly twenty years to come to fruition. It will be a book for our dark age.

The book, “I You We Them” is described by one critic as a “groundbreaking journal of discovery”, and another as a “dogged and worldwide pursuit of ‘the desk-killer’, the government functionary or business executive whose decisions so often cost human lives.”

Dan’s publisher, Penguin, describes the book as a “study of the psychology of some of the least visible perpetrators of crimes against humanity, the ‘desk killers’ who ordered and directed some of the worst atrocities of the last two hundred years”.

The book examines, amongst others, the case of Shell in Nigeria, especially at the time of the murder of the Ogoni 9. The methods of killing may have changed over time, he writes, “but the desk killers are still here.”