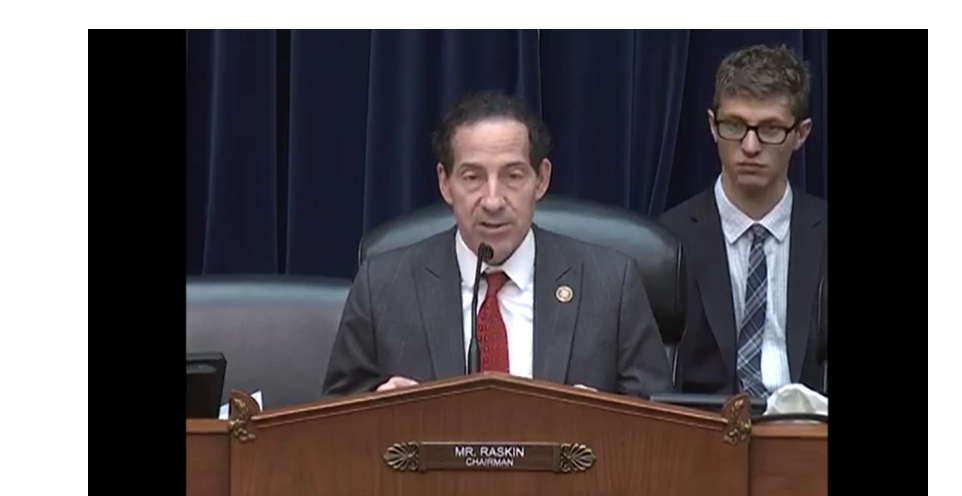 We are witnessing unprecedented scenes in New York and Washington regarding Exxon’s decade-long climate denial campaign.

Today is the second day of Exxon’s trial in New York, with the oil giant in the dock charged with defrauding the public and investors over the risks of climate change.

Meanwhile, as I write, the House Oversight subcommittee is holding a hearing now called: “Examining the Oil Industry’s Efforts to Suppress the Truth about Climate Change.”

The Subcommittee is examining how the oil industry’s climate denial campaign has “negatively and disproportionately affected people of color and vulnerable populations in our country and around the world, as well as drowned out the voices of everyday Americans.”

In his opening statement for the hearing, subcommittee Chair, Jamie Raskin (pictured) stated that: “the evidence seems overwhelming that, for decades, the oil industry understood the lethal threat of climate change but misled the American people and buried the scientific truth of climate change”.

Raskin added, in a strongly worded testimony, that: “Oil companies like Exxon knew the scientific reality of climate change forty years ago but waged a war of deception that cost us precious time in the fight to save our planet”.

He continued that, although “Exxon knew decades ago that climate change was real and would have devastating consequences … Exxon could have chosen to present this truth to the American public” and “redirect its own research and development resources,” leading the way to a “global shift towards alternative energy sources”.

But it did not. But even though, #ExxonKnew, “this was not the path that Exxon chose.” Instead, the company “sold off its renewable energy companies, doubled-down on fossil fuels, and along with other Big Oil companies like Shell and Mobil, launched an extensive and sinister campaign of climate denial.” This was a campaign that even undermined its own scientists.

The Congressman finished by asking whether we “will allow climate denial to continue robbing our children of their destiny and dreams?” No, he said, “we will not do that.”

But Exxon is still trying to hide that dirty truth that is being exposed in Congress and in a court room in New York.

I have just tried the same.  Putting “Exxon knew” into Google and low and behold the first reply is more of Exxon’s ongoing denial campaign, spinning the truth.

It says that the accusations that Exxon has mislead the public and investors over climate change “are false”.

The company now has a whole page pushing back on the #ExxonKnew theme.

John Cook, a research assistant professor at the Center for Climate Change Communication at George Mason University, who released a report on the oil industry’s decades long denial campaign, told Mashable that Exxon’s tactics are predictable, but that they can’t hide the truth: “They gloss over the fact that they funded climate misinformation,” said Cook.

"Exxon knew of the anthropogenic issues in the 1970s," Garvey said

And former Exxon consultant, Martin Hoffert, told Congress Exxon was publicly promoting views its own scientists knew were wrong,” and that “they deliberately created doubt.”

"They deliberately created doubt," former Exxon consultant Martin Hoffert tells Congress, and as a result homes and livelihoods "will be destroyed" due to climate impacts

Exxon’s scientists knew. #ExxonKnew, despite what they want you to read on Google. The final words of Jamie Raskin’s opening today were: “We will find the truth, and the truth will start the process of setting us free. If we act with courage and resolve, the truth will give us a second change to get it right”.