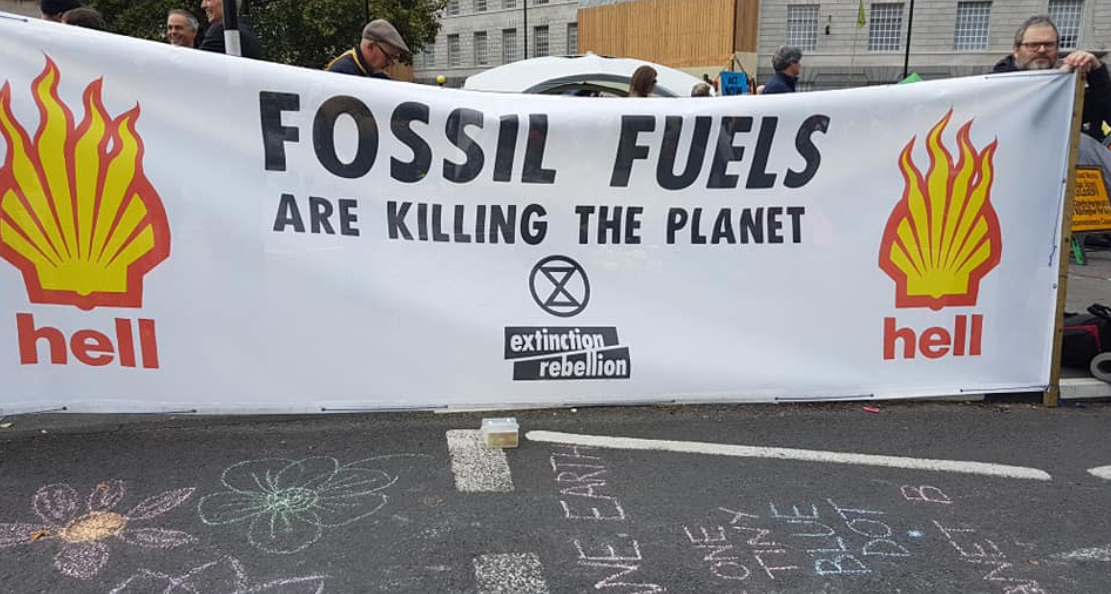 As I write, the latest mobilization of inspiring climate activism by Extinction Rebellion is underway in some 60 cities across the globe, in protests that started in New Zealand and Australia, which then spread across Europe and are now targeting the financial district in New York.

In London, there are two weeks of protests around Westminster, trying to force the UK Government to adopt for mare radical targets to decarbonise the economy by 2025, not the stated Government policy of 2050.

Several thousand have been protesting in London with up to 30,000 expected to take action over the coming two weeks. And it’s not just the young that are protesting. Two of those arrested included Sarah Lasenby, 81, a Quaker and retired social worker from Oxford. “It is imperative that the government should take serious actions and put pressure on other states and global powers to radically reduce the use of fossil fuels,” she told the BBC.

Two years older than Sarah, was 83 year old rebel Phil Kingston, who was arrested outside the Treasury, after spraying: “Life not death for my grandchildren.”

"Life not death for my grandchildren"#EverybodyNow

UK support for fossil fuel projects overseas in 2018 was £2 billion, an 11-fold increase on 2017. The UK also remains the biggest subsidisers of fossil fuels in the EU. pic.twitter.com/DL4sj13b2y

It is right to target the Treasury, as the UK Government is still funding fossil fuels at home and abroad, directly and indirectly, via organizations such as the European Investment Bank.

They keep funding fossils despite the climate emergency and our warming world. Every day our climate crisis gets worse. Newly released data reveals that September was the warmest September ever recorded.

There is no doubt that Extinction Rebellion along with the global school strikes for climate are helping shift public consciousness about climate change. But a crucial question is are they shifting Government policies around the world too?

As the Washington Post notes about today’s protests: “It seems their tactics work. It was after those protests, that [UK] Parliament declared a climate emergency. In June, the government signed up to a 2050 decarbonization target, the first major economy to do so.”

But, this comes with a caveat. The Government of Boris Johnson is probably the least climate-friendly ever, with many links to fossil fuel funded think-tanks. The UK Parliament may have declared a climate emergency, but in its Brexit-dominated political deadlock, it has taken no meaningful action on climate.

In fact, the opposite is true, over the last three years since the Brexit vote, as the climate emergency has intensified, the British Parliament has wasted three years of time, and billions in finance that could have helped solve the climate problem. Britain could have shown true climate leadership. It may have signed up for a 2050 decarbonisation policy, but this is way too late to prevent climate chaos.

And it is still making the problem worse. Like many other groups, Oil Change International has pointed out that gas is no bridge fuel. It will not solve the climate crisis.

So with an ironic timing, the BBC reported today that, against the advice of its own planners, the UK has approved four new gas-fired turbines. The Planning Inspectorate had recommended their refusal due to their clear “impact on climate change,” yet the projects appear ready to go ahead.

The legal group, ClientEarth, told the BBC that the approval of gas power stations at the Drax power plant would take the industry’s carbon emissions way over their projected limit.

The group’s lawyer, Sam Hunter Jones, said: “The UK has already (approved) more gas capacity than the government’s own forecasts estimate will be required through to 2035.” He added: “Approving Drax’s plant risks a carbon budget blowout, a huge stranded asset requiring propping up by the taxpayer, or a combination of the two.”

The UK government, like all other governments, is not doing nearly enough. In addition to these gas plants, they continue to pursue oil and gas drilling in the North Sea as well. And that is why people are on the streets protesting. They may be doctors, writers, teachers, mechanics, artists or even ex-Police. But they are all demanding urgent action now. The climate crisis is making them all rebels. And the rebellion is growing.