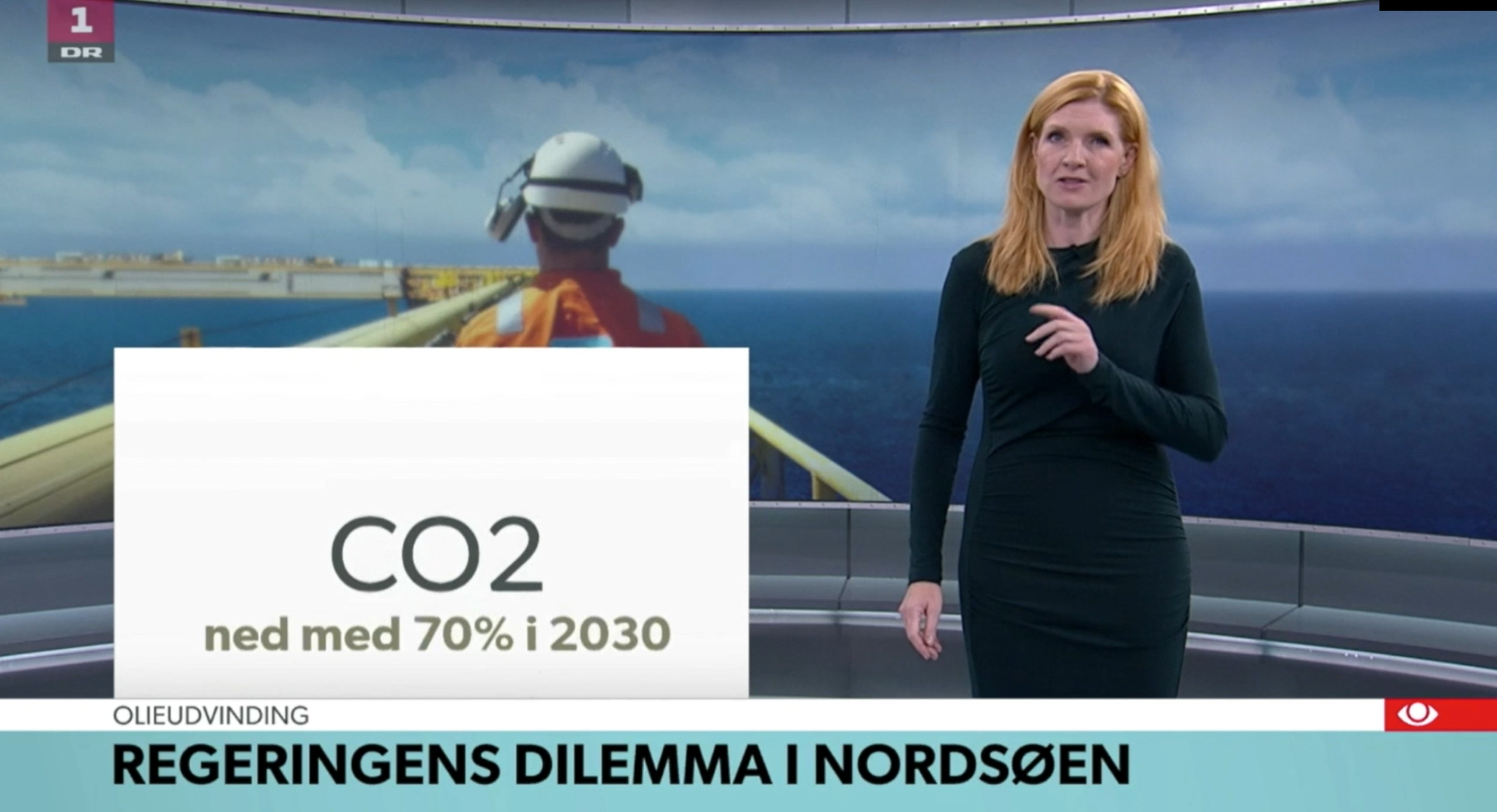 Coverage of the report aired on the Danish evening news following its release and a follow-up article from this week showed two parties in the Danish governing coalition voicing support for no new licenses to be issued. Danish climate organizations and labor unions have also long supported this move. 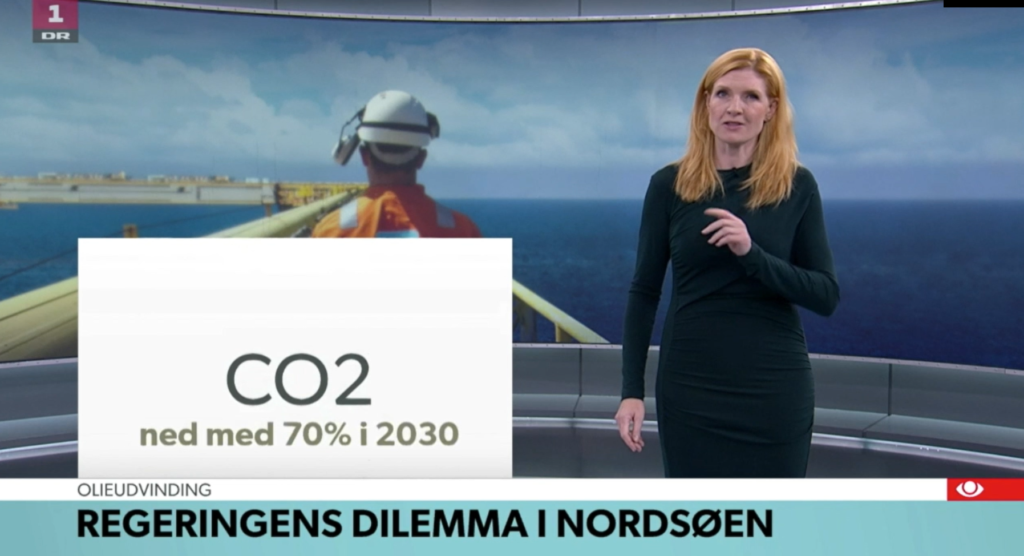 Read some of the coverage from Danish broadcaster DR here.

All of this means Denmark could be close to announcing an extraction phase-out! To highlight the impact this move would have, here are some key takeaways from the report for Denmark and, frankly, most other wealthy countries dragging their feet on climate action.

1. You can’t expand fossil fuel production AND be a climate leader:

The current Danish government formed in June and credited young people for making it ‘the first climate election in Denmark’s history.’ As a result, their coalition agreement made a series of relatively bold climate promises including a new target of 70% below 1990 emissions by 2030. Given this, it would be pretty incongruous for this government to let oil & gas production grow under their watch, but that’s exactly what’s set to happen if they don’t act:

Projected CO2 emissions from Danish oil and gas, compared to CO2 emissions goals for all domestic energy set by government and the 92 Group coalition of NGOs, 2019-2050.

Denmark currently produces about as much oil and gas as it consumes (being just barely a net importer the last two years). That means if the Danish government lets industry plans go ahead they will either (a) meet this target but export oil & gas with associated emissions that overshadow this progress, or (b) fail to meet it & consume more oil and gas domestically than is Paris-aligned.

The first test the Danish government faces is around a batch of new oil and gas licenses which are due to come up for final approval – a decision that is due to come up any day now. These licenses wouldn’t expire until 2055 and they represent a large portion of the projected ‘undeveloped’ and ‘undiscovered’ growth in the graph above.

Beyond issuing no new licenses, Denmark should also be pivoting towards a planned and equitable phase-out of fossil fuels. In our report, we recommended they also:

Denmark deciding to pursue a production phase-out – and I can’t stress this next part enough – would have global importance because we’re incredibly oversubscribed with respect to planned and already-operating fossil fuel projects. Below is our most recent update of carbon dioxide emissions from developed global fossil fuel reserves, compared to carbon budgets that are in the range of the Paris goals. There is a desperate need for wealthy producers like Denmark to break the ice by implementing policies to keep their remaining reserves untapped and phase out some projects early. There’s a great recent Science article on the domino effect this could have here.

Our updated count of fossil fuel reserves vs carbon budgets from our Sea Change report in May.

New Zealand, France, Costa Rica, and Belize have taken some steps towards this kind of phase-out. Iceland, Sweden, and Spain are close to doing so too. Denmark’s new government has stated repeatedly that they would like to lead climate diplomacy internationally. Committing to a full just transition away from oil and gas production is the single most important step they could take to inspire meaningful international climate action, and they would be the largest producer to date to do so.

3. Phasing out extraction isn’t as hard as rich countries make it sound:

The imperative for fossil fuel extraction phase-outs holds for any wealthy fossil-fuel producer. These countries have the historic responsibility, the most resources to do it, and in most cases a relatively easy path to a new economy. Obviously, many more metrics matter than just those shown below, but this chart is still a telling approximation. 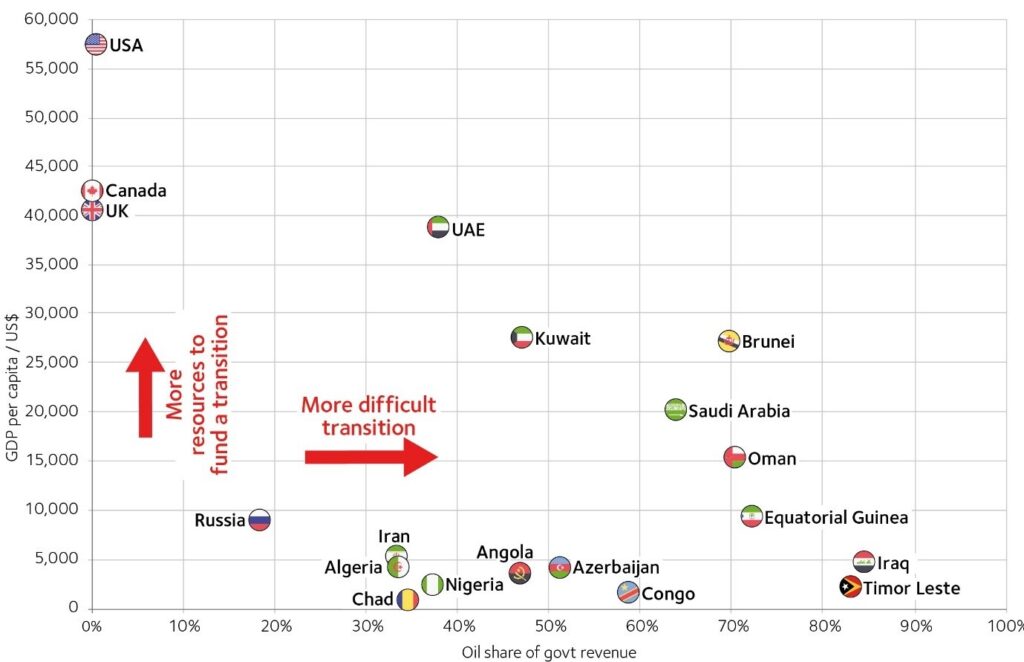 Oil’s share of government revenue vs per capita GDP, selected countries, 2016 (or nearest year for which data is available)

In my home in Edmonton, Canada the political discourse typically treats the oil sands as some sort of lifeblood, so it is usually a pertinent reminder that they are only 2.8% of Canada’s GDP and an even smaller portion of government revenue because of our lax royalty rates. As has been the case in many fossil fuel-producing jurisdictions for a while, renewable energy has provided more jobs in Canada than the oil sands since 2014.

4. Labour organizers are leading the conversation on just transition:

We often hear workers used as an excuse for measures that really just serve to protect the interests of fossil fuel corporations. But the labor movement has been leading the discussion on a just transition from oil and gas for decades, and they have road maps to a future with a safe climate and good green jobs for all. What’s more is they’re ready to mobilize around them! At least 73 trade unions representing hundreds of millions of members globally have endorsed this week’s #climatestrike, and coalitions between labour and environmental justice organizations are only getting stronger. 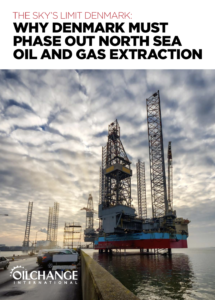 We could be just around the corner from some landmark climate leadership from Denmark. To help push them to make the right decision, consider taking a moment to remind Denmark’s Climate Minister Dan Jørgensen and Prime Minister Mette Frederiksen via Twitter that the whole world is watching their next steps! Climate leaders don’t approve new oil and gas licenses.